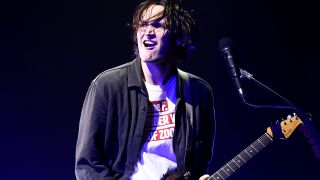 Back in December, it was confirmed that Red Hot Chili Peppers had reunited with John Frusciante – a move which ousted guitarist Josh Klinghoffer from the band.

In a new interview with WTF With Marc Maron, Klinghoffer has spoken about how he heard the news, with the guitarist saying when it was delivered, it came as a “complete shock” to him, but also admits it ultimately wasn’t a surprise.

Klinghoffer explains: “I rode my bike over to Flea’s house. They just said, ‘We’ll get right to it. We’ve decided to ask John to come back to the band.’ I just sat there quiet for a second and I said, ‘I’m not surprised.’

“And the only thing I could think to say was, ‘I wish I could have done something with you guys, musically or creatively, that would have made this an absolute impossibility.”

Klinghoffer stresses there is no animosity between himself and the group, and adds: “It’s absolutely John’s place to be in that band. So that’s why I’m happy for him, I’m happy that he’s back with them.

“If John coming back had happened five years ago, it would have been hard for me, temporally, to weigh my work against what they had. Now, after 10 years, two tours, and almost three albums of writing, I’m really proud of what I did with them. I feel like we did create something.”

Following the news of Frusciante’s third stint with the Chili Peppers, drummer Chad Smith confirmed they were writing and recording together again, telling Rolling Stone: "The festivals are the only shows booked. For now, we’ll mostly be concentrating on new songs and writing a new record. We’re all real excited to make new music."

When pressed to clarify if that means the band are in the middle of recording new music, Smith replies: "Yes. That’s all I can say."