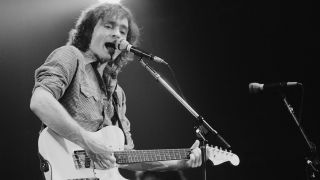 Marty Balin, best known for his role as co-founder and vocalist for San Francisco band Jefferson Airplane, has died at the age of 76.

Balin's death was confirmed by his representative, Ryan Romenesko, on Friday. Romenesko released a statement saying Balin died on Thursday, with his wife, Susan Joy Balin, by his side. The cause of death has not been confirmed.

Jefferson Airplane splinter group, Jefferson Starship, paid tribute to Balin on their Facebook page. "With heavy hearts, we learn today of the passing of Marty Balin," they wrote. "He was a true talent and inspiration to many. We send his family and friends our deepest condolences. Your love songs will live forever. RIP Marty Balin."

Jefferson Airplane formed in 1965 and pioneered San Francisco's burgeoning psychedelic rock sound. They enjoyed a series of hits in the late 60s and early 70s, including singles Somebody To Love and White Rabbit. The band was inducted to the Rock And Roll Hall Of Fame in 1996 and awarded the Grammy Lifetime Achievement Award in 2016.

We have lost a true legend. @Marty_Balin helped start a revolution that still lives on today. He will be greatly missed - our hearts go out to his family, friends and music fans everywhere. – Team Jefferson Airplane https://t.co/gHCa4bvo4O #MartyBalinSeptember 28, 2018

Farewell, Marty Balin. Many a late night driving my car with his voice coming out of the speakers. Such a great singer. pic.twitter.com/yUyTfOjna9September 29, 2018

Sad to hear of Marty Balin’s passing. Here is his beautiful vocal on a song he wrote with just perfect mid 70s production. A little masterpiece: Miracles” by Jefferson Airplane https://t.co/DPpf1knfeJSeptember 28, 2018