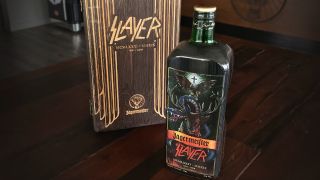 Jägermeister have launched a limited edition bottle as a tribute to Slayer ahead of their appearance at Download UK on June 16.

The 1.75 litre bottle features custom-made Slayer artwork and is presented in an engraved box and is limited to just 500 bottles, which are available through Jägermeister’s online store.

Slayer guitarist Kerry King says: “We’ve had some good times with Jägermeister through the years, we love that they’re creating a limited edition bottle to recognise the end of our journey and it looks awesome.

“I’m honoured that our friends at Jägermeister hold us in such high regard. I can’t wait to get my hands on one!"

Jägermeister UK’s music manager Tom Carson adds: “We have enjoyed a longstanding friendship with Slayer, they’re legends who have slayed the game for almost 40 years. Releasing a special edition Slayer bottle is our way of celebrating their legacy.”

Slayer are just about to wrap up the North American leg of their final world tour and will return to Europe on June 4, where they’ll play in Poland.

Along with their appearance at Download, Slayer will also play other festivals over the summer, including the Sweden Rock Festival, Rock Am Ring, Graspop Metal Meeting, Hellfest and Resurrection Fest.