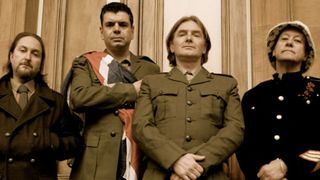 The UK prog rock band It Bites have confirmed that they have split up.

In a post on the band's Facebook page over the weekend drummer Bob Dalton announced; "Hi everyone. I have to say that unfortunately It Bites won't be touring or gigging again, we don't have any plans for anything else in the future but it was a great time and we do appreciate all of you who have followed us through the years."

The band had been largely inactive of late, with singer/guitarist John Mitchell involved with a host of other projects including Lonely Robot, Frost*, Kino and Arena. The band's last studio album, Map Of The World, was released in 2012, although a Live In London box set of early performances was released last year.

The band formed in 1982 and rose to prominence when Calling All The Heroes from the band's debut album The Big Lad In The Windmill reached No. 6 in the UK singles chart in 1986. Originally led by Francis Dunnery, the band split in 1990 after three albums. John Mitchell joined a reformed line-up in 2006, recording The Tall Ships in 2008. The band's last full tour was in 2013.