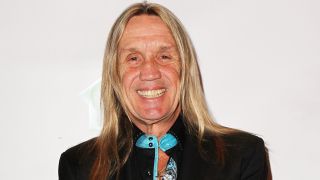 Iron Maiden drummer Nicko McBrain says he might have been the inspiration behind frontman Bruce Dickinson becoming pilot of the band’s plane, Ed Force One.

And he wouldn’t mind a go at the controls himself – if he’s ever allowed.

He won a pilot’s license in the 1980s, but hasn’t flown an aircraft in several years. Dickinson took up his own training in the 1990s and later worked as a commercial flight captain, before learning to manage the Boeing 747-400 used as Ed Force One on their The Book Of Souls world tour.

McBrain tells MusicFeeds: “I’ve got a twin-ray license, a multi-engine rating. The last time I flew was about 10 years ago – that was with Bruce, funnily enough.

“I pretty much did it to prove that I could, you know. I think Bruce was partially inspired by that. His mindset was that if the drummer could do it, he could!”

He continues: “I’ve been up the front of Ed Force One, but I haven’t had a go yet. I’m going to see if I can finagle something when we don’t have all the crew with us.

And the drummer has warm words about his colleague’s flying ability: “He’s phenomenal,” McBrain says. “He’s just a little guy, but he faces down a 400-tonne aeroplane and fires it up. He does a remarkable job of it too. He shoots these incredibly smooth landings.

McBrain recently told how Dickinson’s cancer battle had inspired him to stop drinking. Iron Maiden’s world tour continues until August and includes a headline appearance at the Download festival at Donington on June 12.