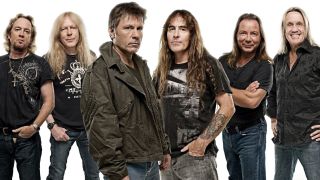 The vocalist laid down his tracks for 16th album The Book Of Souls in 2014 before being diagnosed with the disease, and received the all-clear last year.

McBain tells Metal Hammer: “He’s my hero. What happened with him was very, very frightening, but he fought it well, he studied it, he had great people working with him, and now he’s back stronger than ever.

“I’m so proud of him for battling through that terrible, obnoxious disease, and coming back through that. He’s my Miracle Man, he really is. When the doctors gave him the all-clear, that was the last time I took a drink.

“Having Bruce being sick, I went into a bit of a slump. After finding out he was well, I thought, ‘You know what? I’m gonna have to get myself fit.‘”

In a separate interview with The Drummer’s Journal, McBain says: “We recorded that album with Bruce knowing that something wasn’t right. When the news came back that he had cancer, I was just concerned for a friend. Plus it made the think about my own situation.

“When he got the all-clear I looked at Bruce and thought, ‘Here’s my mate – he’s been through hell, beaten cancer, and none of it was his fault.’ And there I was, putting myself through hell, except I was doing it to myself with drink.

“I knew I had to stop. I took a lot of inspiration from Bruce. It made me realise how stupid I was being.”

His decision to clean up was reinforced when he watched an interview he’d done while drunk. “I’d probably been drinking for about four days straight,” says the 63-year-old. “My eyes were bloodshot. I was slurring words and not making any sense.

“I don’t remember doing the interview. I realised that is not a good situation to be in.

“So I haven’t had a drink in a while now. I’m not saying I’ll never have another – but something had to change.”

He adds: “I’m just glad Bruce is alright. He seems to be running on 20 cylinders at the moment.”

Iron Maiden’s world tour continues across the United States this month, with dates to follow in Japan, New Zealand, Australia and Europe, including a headline appearance at the Download festival in June.

Iron Maiden are the cover stars of the current issue of Metal Hammer magazine, out now in print, digital and via TeamRock+.