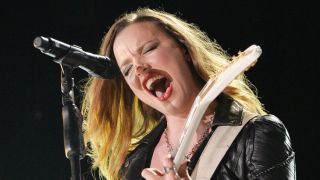 She tells PCM: “It’s the weirdest thing in the world to write a song and then have someone tattoo it on their arm and say the song saved their life. It’s surreal because we know what they mean to us but the fact they can impact and touch somebody else is crazy.

“When I’m writing about a certain subject or something I’ve personally gone through, it’s over when the song is done. The meaning of the song evolves over time. Maybe I’m going through something completely different and all of a sudden that song means something different to me while I’m singing on stage.”

The US rockers recently played the Shindig Festival in Baltimore – taking a break from their studio sessions where they’re recording the follow-up to 2012’s The Strange Case Of….

They recently revealed they’re doing things differently this time around – playing together and attempting to get the tracks down in one take.

Hale adds: “When we’re all in one room and you hit record, we are all bleeding through each other’s mics. If one person screws up we have to do it the whole thing over again. It’s a real challenge.”

She also said while the band have grown and evolved down the years, they still feel the excitement of 14-year-old when making music.