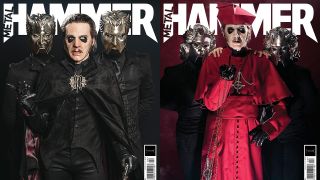 Two covers. One world exclusive interview. In the new issue of Metal Hammer, we find out how Tobias Forge took on the world and won to  make Ghost one of the biggest metal bands of the 21st century.

The new issue features two exclusive editions, which with its own cover and exclusive Ghost gifts.

Both are on sale in UK shops right now! Collect them both!

In  the issue, we head to Paris to dissect the brain of Ghost mastermind Tobias Forge, as he reveals how he masterminded one of the most unlikely success stories of the modern era. He opens up like never before about  the birth of Papa Emeritus, the future of Cardinal Copia and what it's like being the most divisive man in metal.

Also in the new issue, we revisit the story of Brave New World - the Iron Maiden album that brought the metal legends back to greatness after a decade of turbulence.

We also go backstage at Architects' biggest show ever, get a  history lesson from Rotting Christ, go behind the scenes at the  star-studded Dimebag tribute and find out how a Satanic doo-wop band called Twin Temple managed to piss off US conspiracy theorist bell end Alex Jones.

There's also brand new, exclusive interviews with While She Sleeps,  Venom Prison, Children Of Bodom, Dream Theater, Bullet For My Valentine  and much, much more.

Only in the new issue of Metal Hammer - on sale now. Order your copy here.