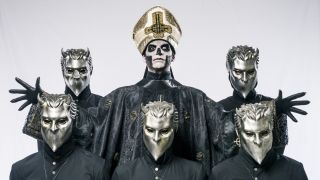 Ghost tend to behave as mysteriously backstage as they do when they’re onstage, says one of the band’s Nameless Ghouls.

The occult rockers – now fronted by Papa Emeritus III – perform behind masks and have never revealed their identities.

And despite having been on the road with big-name acts including Avenged Sevenfold, Mastodon and Opeth, they often don’t interact with their tourmates.

The Ghoul tells MusicRadar: “We do act a little differently than a lot of bands. We don’t run around backstage tweeting, Instagramming and taking pictures of every band we see. That’s the modern way of doing things, and we don’t really do that. To a lot of senior bands, maybe we come off like we’re… different.”

That’s on top of the Ghoul’s own personality. “I’m not the most social person around, and perhaps I can come off a little stand-offish, just because I don’t run around asking everybody for pics and things like that,” he says.

“There’s always that high school corridor element to bands on tour, and sometimes it’s just not possible to say hello to other guys. ‘Oh, hi, I’m sorry we weren’t introduced before.’ You can go weeks without actually meeting people you’re on tour with.”

He adds: “People have the tendency to be very respectful of us – but you’ll always have that asshole, somebody who’s showing off to his buddies because maybe they’re not fans of the band. That’s the exception, not the norm.