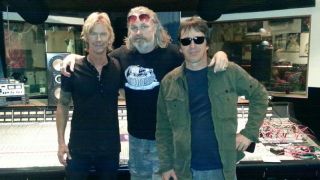 Former Guns n’Roses bandmates Duff McKagan and Izzy Stradlin have recorded a “super kick-ass” track together, the bassist has revealed.

The pair spent his birthday in the studio owned by Queens Of The Stone Age mainman Josh Homme, along with drummer Taz Bentley.

And the results were so positive, there are likely to be more sessions in the future.

McKagan tells Vorterix (via Blabbermouth): “We were talking on the phone and Izzy said, ‘Let’s go record a song.’ We used Josh’s studio. We went in – Izzy and I and Taz – and just had a blast.

“It just got mixed. It’s a super kick-ass song. We just had fun and we’ll probably do it some more.”

He says of the creative process: “I had a riff and he had an idea, and we recorded it in half a day.”

But McKagan’s not certain whether anything solid will come out of the partnership – he adds: “We just enjoy making music and enjoy each other’s company. We’re allowed to do that.”

McKagan and Gilby Clarke joined Slash on stage in Argentina for a guest appearance. The bassist performed GnR track It’s So Easy with Slash and co before they were joined by Clarke for anthem Paradise City.