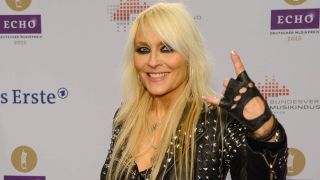 Doro Pesch has recalled how a drinking session with Lemmy almost scuppered her band Warlock’s chances of landing a major record deal.

She met the Motorhead icon in 1985 when her band Warlock were in London to play a show to be attended by record label execs.

Doro tells MetalSucks: “I was rehearsing with the band before, and decided to go around the corner. There was a pub and it was my first time in one. I went in and saw Lemmy sitting there smoking, with a whiskey and cola in one hand. I was just like, ‘Wow!’“I couldn’t speak English well back then, so I was a little nervous. But we were chain-smoking and drinking – and after a while he reminded me I had to play a gig.“

Doro “had such a buzz” as a result of the alcohol, and that everyone was waiting for her when she got back to the venue.“I got up with the band, and I had had so many drinks I couldn’t remember the lyrics,” she says. Everyone was staring in shock – the agencies and important people – and I just sat down and waited until the band was done.
“Everyone was telling me I ruined my career, I’d never get a record deal. I said, ‘I met Lemmy! He’s my hero, my idol and we had a few whiskey colas.’

“Everyone started laughing and forgave me – and we got the deal anyway so it worked out.“Lemmy and Doro went on to develop a lifelong friendship. She says she’s never met anyone quite like him in the business, adding: ”I would say Lemmy is the one I love the most. I know so many bands and musicians, but he’s number one.“Meanwhile, Doro has launched a Kickstarter campaign to help produce a high-quality video for her single Love’s Gone To Hell. She says: “It is our dream to bring this wonderful song to life in the form of a beautiful, fantastic music video, and it is our goal to create this high-quality vision together with you.”