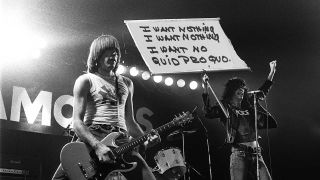 The ongoing impeachment hearing in the US took an unexpected turn yesterday, when US President Donald Trump accidentally created a Ramones lyric.

The incident occurred after a day of drama in which the US Ambassador to the EU Gordon Sondland appeared before the Senate Intel Committee. Following Sondland's testimony, Donald Trump held his usual ad-hoc press conference on the White House lawn, shouting to be heard above the whirring of helicopter blades.

What caught the imagine of the Twittersphere wasn't so much the contents of Trump's booming oratory, but the fact that he appeared to be reading from a set of badly-scrawled notes. And that his delivery was pleasingly musical.

So much so, in fact, that Twitter user Alex Kliment transformed the speech into a Ramones song.

As is the way of the Internet, this was swiftly followed by Nick Lutsko, who turned Trump's message into an instant Emo classic, and Appa The Flying Bison, who reimagined the speech as a song by once-popular warbling miserabilist Morrissey.

Quite where this is headed next we can't imagine, but Johnny Ramone is probably grinning in his grave.

Inspired by @pattonoswalt , here's Trump's notes as if Morrissey wrote them into song, performed by me pic.twitter.com/Emka5wVwzMNovember 20, 2019