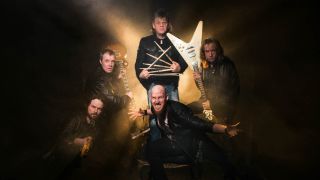 NWOBHM legends Diamond Head have released a video for The Belly Of The Beast. It's the first single to be taken from their upcoming album The Coffin Train, the follow-up to 2016's self-titled seventh album. The Coffin Train will be released on May 24.

The Belly Of The Beast rattles along like an a classic old-school thrasher, infused with the kind of hostile urgency the band have specialised in for four decades.

"This is classic Diamond Head," says guitarist Brian Tatler, "bringing to mind songs like Helpless and The Prince. It’s a very exciting song to play and really pumps up your adrenaline. It’s in your face the whole way though.”

“It’s a song about personal demons," adds singer Rasmus Bom Andersen. "Everyone carries at least one through their life. Don’t be hasty to judge people, for we all have a battle inside."

The Coffin Train was recorded at Vigo Studios in Walsall, Circle Studios in Birmingham and Raw Sound Studio in London, and is Andersen's second album fronting the band since joining in 2014.

"Rasmus is a big part of why the album, and band, sound like we do," says Tatler.  "He has a fantastic vocal range, knows exactly what to do with his voice and is incredibly knowledgeable about it!

“All along we wanted to make sure we didn’t lose sight of what we call ‘The Brief’' I would never want to deny our NWOBHM style and sound, that’s what originally got me excited and Diamond Head noticed. And I still enjoy the creative journey we go on."

The Coffin Train will be available to pre-order from March 8. The band have five festival shows lined up this summer, and will be supporting Saxon in London and Manchester in October. Further dates will be announced soon.