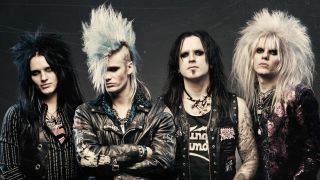 Crashdiet have parted ways with singer Simon Cruz – and they say he walked out mid-tour last month without giving his colleagues any advance warning.

They were also working on an album with Cruz, who replaced H. Olliver Twisted in 2009.

Remaining members Martin Sweet, Peter London and Eric Young say in a statement: “There is a reason for our lack of news lately. Simon Cruz has left Crashdiet – well, actually he decided to leave in the midst of our mini tour in Japan with no notice whatsoever.

“The last few months have been confusing to say the least. We haven’t been sure of what to make of this – other than that our collaboration with Simon is over.”

But the band vow: “The recording of the new album will proceed as planned, and you can expect hear more from us soon.”

Their fourth album The Savage Playground was released in 2013.