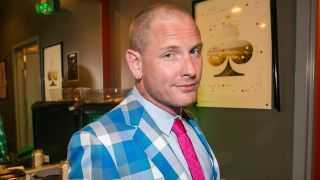 Corey Taylor worries about what aliens think about humanity’s stupidity – and wonders if that’s the reason they haven’t made contact.

But he insists he’s no “ancient astronaut theorist” and uses his point to argue that people should stop accepting low-quality entertainment.

In an excerpt from his book You’re Making Me Hate You published by The Guardian, Taylor says: “Shit sells. You all love your shit. From your derivative music to your shiny hollow movies, from those videos displaying your idiocy on the internet to your addiction to fake reality on TV, that saying is a fucking fact. Shit sells and it sells really well.”

He continues: “Yes, I worry about what the aliens will think of us. I don’t think we’ve been visited by a more advanced species. I don’t think they’re plotting to come invade. I think if they’re watching, they’re doing the same thing I am: wondering why the fuck you people are mesmerised by all of this half-assed entertainment.

“They’ve come to the conclusion that we’re all apes in designer clothes. They are amazed that we can feed and shelter ourselves with all the stupidity we involve ourselves with. Worse yet, they believe our stupidity is contagious. They think that if they come here to make contact, they might catch our ‘dummy’ virus.”

He says the aliens have “quarantined” themselves and won’t visit Earth until “the house is empty and the lights are off.”

And he admits he’s disappointed with the situation, explaining: “That’s because I really wish they’d pick me up and take me with them. With all the brain damage in the world today, you can’t blame me.”

Slipknot headline Download at Donington on June 12, where Taylor will sign copies of You’re Making Me Hate You that have been purchased at the festival.