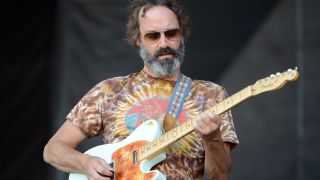 Chris Robinson Brotherhood guitarist Neal Casal has died at the age of 50.

The news was confirmed on Casal’s social media accounts earlier today, although no cause of death has been made public.

A statement reads: “It’s with great sadness that we tell you our brother Neal Casal has passed away. As so many of you know, Neal was a gentle, introspective, deeply soulful human being who lived his life through artistry and kindness.

“His family, friends and fans will always remember him for the light that he brought to the world. Rest easy Neal, we love you.”

After a five-year stint with Rickey Medlocke's Blackfoot, Casal released 10 solo albums between 1995 and 2011, before hooking up with former Black Crowes vocalist Chris Robinson. He played on all the Brotherhood’s albums, including their 2012 debut album Big Moon Ritual.

In 2008, the New Jersey native’s photographs were exhibited in the Bauhaus Gallery in Tokyo and his work has appeared in a variety of music magazines including Rolling Stone and MOJO.

Jennings has paid tribute to Casal, saying: “I am absolutely devastated with the news of the loss of my dear friend and consistent collaborator Neal Casal – he was always my favourite picker in LA and we’d all just finished some beautiful music together. I’m really just hollowed out by this.”

Tributes have also been posted on social media by DJ Bob Harris and Ryan Adams. See them below.

I am absolutely devastated with the news of the loss of my dear friend and consistent collaborator @nealcasal - he was always my favorite picker in LA and we’d all just finished some beautiful music together. I’m really just hollowed out by this. God bless NC Shooter Jennings

I am so humbled, so grateful, so honored for every moment when I was having occular migrant seizures onstage, and only Neal saw.He would walk over and give me this look.. “you can do it, Ryan” My fingers locked in a seizure.That kindness & brotherhood is once in a lifetime pic.twitter.com/4eeSefKTklAugust 27, 2019