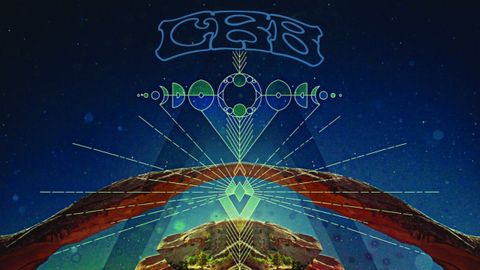 If Big Moon Ritual has the slow-building, deep-toking vibe of a private jam among bong-loving virtuosos, then that’s because it was a project that was born on the road.

Following on from the Black Crowes’ announcement of an indefinite hiatus and series of intimate farewell shows last year, Robinson soon embarked on a marathon, two-month tour of the clubs and roadhouses of California before laying down a track, and it would seem that some occidental sunshine has seeped into the native Georgian’s bones.

Comparisons with the Black Crowes are inevitable, but while the signature soulfulness and breathtaking musicianship of that dope-smoking, blues-laden, platinum-selling rock behemoth are undeniably echoed here, you get the sense that Robinson’s happy to cut the creative umbilical cord, oh, about eight or nine minutes into the gleefully self-indulgent, 11-minute, zero-G psychedelia of album-opener Tulsa Yesterday.

Guitars tinkle, vocals shimmer – this isn’t a record concerned with scaring away the easily distracted, and if you’re expecting Hard To Handle or Remedy in this country-inflected journey into outer space then look elsewhere, because judging by these gentle grooves, the Black Crowes are most assuredly in mothballs.

That said, the mellow strains and acoustic hymnals of 2010’s Croweology do seem to foreshadow these seven moseying tracks, but they suggest nothing of the playful tenderness that ties the whole cosmic affair together. Resolutely mid-tempo and gentle-sounding, this is a smoky soundtrack to coastal drives and late night rioja – think Pacific Ocean Blue meets Humble Pie – and it does, thankfully, come down from orbit once or twice.

Rosalie, with its ‘Air is getting thinner, do you wanna get high?’ chorus is as good-times as it gets, Tomorrow Blues is a head-bopping confessional so infectious you’ll shake your fist at the stereo, while the radiant warmth of Reflections On A Broken Mirror meanders along at the pace of a lava lamp.

Indulgent? Perhaps. Indispensable? Absolutely. The greatest fault in Big Moon Ritual is its modest ambition, its subtle flavours – but then Chris Robinson has nothing to prove, and it’s that innocent charm that makes this such a gold-plated release. It’s a trip down a musical rabbit-hole that no one should miss. With a follow-up due in September, we’ll be all ears.