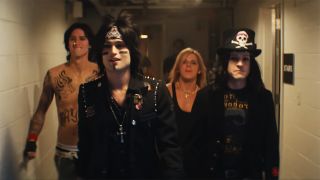 Now, the full trailer has been uploaded, giving us the first proper look at what we can expect when the highly anticipated film premieres on Netflix on March 22.

The trailer shows us live clips, the band meeting Doc McGhee (played by David Constable), the Crue's infamous partying and some of the key moments from the band's career.

Motley Crue have been back in the studio recording four new tracks for The Dirt, with Kelly set to appear on one of the new songs.