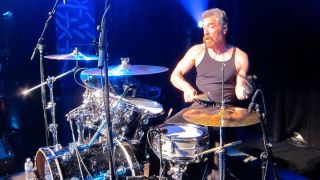 Creedence Clearwater Revival drummer Cosmo Clifford admits a reunion with frontman John Fogerty would be a big moneyspinner – but he's not waiting for a call.

And even though Fogerty recently suggested he might consider working with his surviving bandmates again, the drummer says the time has long passed.

Clifford tells ABC: “It would have been nice 20 years ago. But I like the guys I’m working with now.

“I suppose if the original band got together again the money would be huge – but life is short, and the idea is to have as much fun as you can while you’re on the planet.

“So I wish John well. He’s got his band and we have ours, and we’re happy where we are.”

He remains proud of the work CCR created in their five years together. “I’ll be in a store, or surfing on the radio, and I hear those songs,” he says. “They could be a band right now, in the new millennium.

“That’s the beauty of it: great songwriting and great execution of the recordings. I think that’s why we’re still around.”