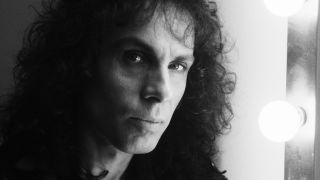 A petition has been launched for a Ronnie James Dio statue to be erected in the late rock icon’s hometown of Portsmouth, New Hampshire.

More than 1400 fans have signed the petition to have a memorial erected in the city’s Prescott Park to honour the Rainbow and Black Sabbath singer’s legacy.

Dio died in May 2010 at the age of 67 after losing his battle with stomach cancer.

Arts organiser and campaign founder Brian Kelly says: “Ronnie James Dio is a hero and a champion of art and deserves to be memorialised forever on his native soil. Dio was a musician that had, and still has, a great influence on many in the music industry.

“There are currently other towns and cities with Dio’s likeness, but at this time, his birthplace has nothing. Mr Dio sold over 47 million albums in his life and is still selling today.

“He was a heavy hitter in bands like Elf, Rainbow, Dio, Black Sabbath and more. His contributions are undeniable. We have to do something.”

It comes as a petition to have the US national anthem changed to War Pigs by Black Sabbath was launched on March 15 (Tuesday). It has gained nearly 4000 signatures so far.