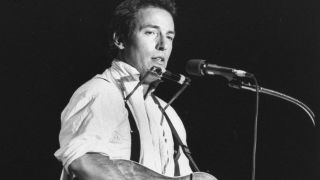 The set was Springsteen’s first major appearance since wrapping up the mammoth Born In The USA tour and features Hungry Heart, where The Boss was joined by Crosby, Stills, Nash and Young.

The show, Springsteen’s first acoustic concert in more than a decade, also includes an a cappella version of You Can Look (But You Better Not Touch) and a stripped down take on Born In The USA.

Danny Federici and Nils Lofgren also take to the stage for other tracks including Seeds, Darlington County, Mansion On The Hill, Fire and Follow That Dream.

The performance from the Shoreline Amphitheatre in Mountain View, California, on October 13, 1986, is available in various formats from Springsteen’s website, with $2 from each sale going to The Bridge School.

In addition, a previously unreleased Springsteen track titled I’ll Stand By You has been released. It features on the soundtrack to the film Blinded By The Light.

The movie is based on Sarfraz Manzoor’s memoir Greetings From Bury Park, which explores the impact Springsteen’s lyrics had on him while he was growing up in England in the 1980s.

Bruce Springsteen: 1986 Bridge School Benefit Concert
1. You Can Look (But You Better Not Touch)
2. Born in The USA
3. Seeds
4. Darlington County
5. Mansion On The Hill
6. Fire
7. Dancing In The Dark
8. Glory Days
9. Follow The Dream
10. Hungry Heart

Blinded By The Light Soundtrack
The soundtrack to the film based around Bruce Springsteen’s lyrics and directed by Gurinder Chadha features a selection of tracks by The Boss along with various other artists. View Deal