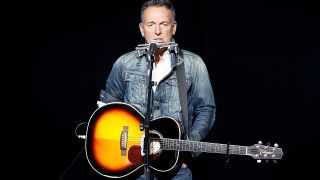 Bruce Springsteen has revealed that his new studio album will be released this summer.

The follow-up to 2014’s High Hopes is titled Western Stars and it’ll arrive on June 14 through Columbia Records.

Springsteen’s 19th album is said to draw inspiration from the Southern California pop records of the late 60s and early 70s, with the record mainly recorded at his New Jersey home studio, with additional pieces laid down in New York and California.

Pre-orders for Western Stars will get under way tomorrow (April 26) when The Boss will also launch the new single Hello Sunshine.

Springsteen says of the 13-track album: “This record is a return to my solo recordings featuring character driven songs and sweeping, cinematic orchestral arrangements. It's a jewel box of a record.”

Western Stars was produced by Ron Aniello and mixed by Tom Elmhirst, with Springsteen handling vocals, guitars, bass and keyboards.