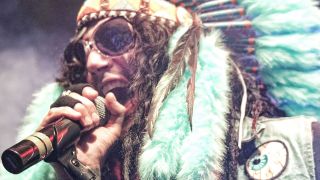 Blacklist Union, fronted by former LA Guns singer Tony West and managed by former Guns N’ Roses manager Vicky Hamilton, have released a video for Alive N’ Well, Smack In The Middle Of Hell. The song is taken from Back To Momo, the band’s fourth album and the follow-up to last year’s Til Death Do Us Part collection.

This new track is “about living in the city, being able to survive despite what goes on around you and to sustain and survive physically, spiritually and mentally,” says West, while forthcoming album Back To Momo is named after a notorious massage parlour in Santa Monica. “I’ve been married three and times had multiple girlfriends,” he continues, “and when things head sour, I head back to Momo.”

Alive N’ Well, Smack In The Middle Of Hell is out today. Back To Momo is released on June 13.