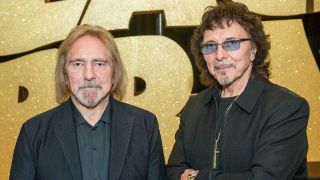 Black Sabbath’s Tony Iommi and Geezer Butler have revealed that they don’t listen to much modern metal.

Speaking at the launch of a new Black Sabbath exhibition in Birmingham, the duo admitted that they don’t keep abreast of the genre they helped create.

“I don’t particularly,” said Butler. “The Beatles, The Stones and The Kinks, that’s my kind of music.”

Added Iommi: “I tend to listen to the more older stuff really. More the classic stuff than the newer stuff because I relate to that more.”

But both expressed gratitude to modern bands who have cited Sabbath as an influence.

“It’s absolutely amazing because we were put down by the press for so long, we didn’t really care about that because we always sold out at gigs and stuff in America,” said Geezer. “And it wasn’t until bands like Anthrax covered Sabbath Bloody Sabbath and Metallica cited us as their influence, we were going, ‘We’re being praised?!’”

Iommi and Butler were launching the Black Sabbath – 50 Years Exhibition at the Birmingham Museum & Art Gallery. The exhibition features personal items and memorabilia including Ozzy Osbourne’s crucifix, Tony Iommi’s home studio and stage outfits from some of the band’s most famous stage outfits, as well as a display of more than 3000 photos of Sabbath fans from across the world.

The exhibition, which runs until September 29, is part of Birmingham’s Home Of Metal project, an ongoing celebration of the city as the birthplace of metal.