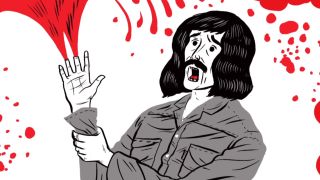 Black Sabbath guitarist Tony Iommi is the subject of a VH1 animated interview, where he discusses how the loss of his fingertips led to the invention of his trademark sound.

He was involved in an industrial accident in 1965, aged 17, the day before he was leaving his steelworks job in Birmingham to tour Europe with his band The Birds And The Bees.

In the interview Iommi says: “It was my last day at work. I went home for lunch and I said to my mother, ‘I’m not going to go back.’ She said, ‘You go back to work – you finish off. Don’t you let them down.’

“She sent me back and they put me on a huge machine, a massive thing, and I didn’t know how to work it. As I was pushing the metal into the machine it came down with such a force – bang!

“It trapped my fingers. As I pulled my hand back I pulled the ends of my fingers off. There was blood everywhere.”

He doesn’t remember being taken to hospital, although he knows someone delivered the two fingertips from his right hand in a matchbox. “As far as the hospital was concerned I could never play again,” he says. “I was extremely depressed.”

But the factory manager told him of jazz guitarist Django Reinhardt, who’d injured his hand in a fire and re-invented his playing style. “It inspired me to get on with it,” says Iommi. “My fingers were so painful that I got a washing-up bottle, melted it down to a ball and I’d sit there with a big ball on my finger.”

His experiments led to developing an “aggressive, raw, fat” sound which he hoped would cover for his “disability.”

He reflects: “Losing my fingertips was devastating – but in hindsight it created something. It made me invent a new sound and a different sort of music. It turned out to be a good thing off a bad thing.”

Sabbath are expected to record their final album this year and follow it with a farewell tour. They’re the cover stars of the latest edition of Classic Rock Magazine, on sale now.