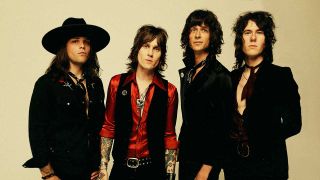 Tuk Smith, singer with much-missed Atlanta rockers Biters, has returned with a new band, Tuk Smith and The Restless Hearts.

The band have also announced a new single, What Kinda Love, and revealed that they'll be joining this summer's Def Leppard and Motley Crue tour, alongside Poison and Joan Jett & The Blackhearts. The tour kicks off in San Antonio, TX, on June 21. Full dates below.

"I think when people first hear the song they might not get its meaning right away," says Smith. "I wanted to create a narrative in the video that helped complement the lyrics. Having full creative vision as an artist is as rewarding as it is daunting. If something doesn’t pan out right there is no one to blame but yourself, but it’s the best feeling when your vision becomes reality."

He adds, "I had so many close friends and family act, be extras, and work on videos with me. I’m so lucky to have such a pool of talent and characters to pull from."

"People that really like honest-to-god rock'n'roll - this is the kind of stuff they’ll love," says Cavallo. "If you are a Tom Petty fan or a Bruce Springsteen fan, if you like really great old-fashioned American rock'n'roll then I believe you’ll like Tuk’s music because it’s cut from that same cloth. It’s original and it is its own thing. I think he’s the real deal!"

Biters announced a break in 2018, with Smith saying, "With heavy hearts we have decided to put Biters on indefinite hiatus. We are beyond grateful to each and every one of you. You have been the greatest fans in the world. Thank you for every show, every t-shirt, every snack, every place to crash, every record and CD, every listen and every download."