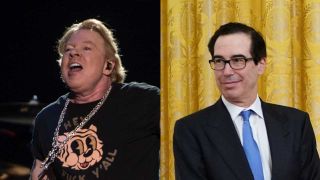 Guns N' Roses singer Axl Rose and US Treasury Secretary Steven Mnuchin have traded insults in what must be the unlikeliest Twitter spat of 2020.

The brief feud kicked off when Rose tweeted, "It’s official! Whatever anyone may have previously thought of Steve Mnuchin he’s officially an asshole," after Mnuchin suggested Americans should undertake more domestic travel, despite current circumstances.

“This is a great time for people to explore America,” Mnuchin told Fox Business Network on Monday. “A lot of people haven’t seen many parts of America. I wish I could get back on the road soon.”

Mnuchin surprisingly responded to Rose's tweet, asking, "What have you done for your country  lately?", next to a picture of the national flag of Liberia, which bears a passing resemblance to the star-bangled banner when you're squinting at your phone looking at flag emojis.

The tweet was swiftly deleted and replaced with one featuring the correct flag, but not before Rose had clocked the mistake.

"My bad I didn’t get we’re hoping 2 emulate Liberia’s economic model," said Rose. "but on the real unlike this admin I’m not responsible for 70k+ deaths n’ unlike u I dont hold a fed gov position of responsibility 2 the American people n’ go on TV tellin them 2 travel the US during a pandemic."

Earlier today Guns N' Roses announced they were teaming up with illustrator Jennifer Zivoin for a new children’s book based on the Appetite For Destruction classic Sweet Child O' Mine.

Meanwhile Susan Holmes McKagan, wife of GNR bassist Duff, has said that new material from the band is sounding "killer".

The author, model and fashion designer was a guest on the Appetite For Distortion podcast this week to talk about her novel The Velvet Rose which is celebrating its first anniversary, and also to chat about the projects she's currently working on.

It’s official! Whatever anyone may have previously thought of Steve Mnuchin he’s officially an asshole.May 6, 2020