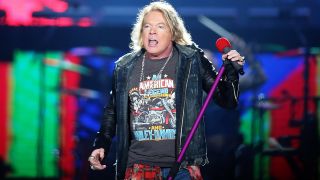 Speaking with the Today programme on Friday ahead of Independence Day, Adams wouldn’t definitively say whether people should or shouldn’t attend mass gatherings in light of the coronavirus pandemic.

Adams’ interview clearly infuriated Rose, who tweeted: “Jerome Adams is a) A coward, b) A POS, c) both. Resign. You don’t deserve the job or title. America deserves better.”

That prompted a direct response from Adams, who tweeted: “Hey Axl. Appreciate your passion – and your music. How about helping me save some lives by sharing the message about staying safe and using face coverings.”

Axl replied: “Awesome! Thanks. You wanna start by telling peeps to avoid large gatherings? Or you want me to? Shame we didn’t get that out their for this weekend like on TV.”

Following that, Rose tweeted: “My disdain for our current administration and what I perceive as its threat to our democracy is no secret. I’m not all that active with social media and though I more than appreciate anyone who takes an interest in something I might post, I don’t really have an interest in how many followers or retweets etc.

“I have as my political or social issue posts are not about me. They’re about the issues.

“In general, my posts in regard to current events, politics or social issues are usually coming from a sense of outrage, obligation and responsibility to say something at times when I feel not to is being complicit – as opposed to a desire for attention or self-promotion.

“I’m nobody, just a citizen that like everyone else has my own opinions and believes in my heart that ultimately, I want what’s best for not just our country, but for humanity, wildlife our environment and other’s as opposed to right, left or any other wing fascism – at least in this country free to disagree.”

He added: “So for me, when I feel someone in this administration for example or perhaps media, in entertainment or the public says or does something that in my view supports or caters to the irresponsibility of this administration or various issues with government or law enforcement, I may voice an opinion.

“Perhaps a strong or perhaps considered by some a lewd or immature response or opinion. It happens.”

In May, Rose got involved in a Twitter spat with Steven Mnuchin after the US Treasury Secretary told Fox Business Network that despite the pandemic, it was “a great time for people to explore America.”

Hey Axl - appreciate your passion (and your music 🎸). How about helping me save some lives by sharing the message about staying safe, and using face coverings?! 😷👇🏽https://t.co/GtwMggagh4July 4, 2020

Awesome! n’ thanks! U wanna start by telling peeps to avoid large gatherings? Or u want me to? Shame we didn’t get that out there 4 this wkend like on TV.🙁🇺🇸July 4, 2020