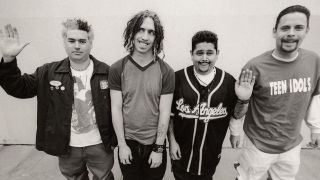 Fat Mike might seem like the last person you’d expect to write a concept album for a musical production. Billie Joe Armstrong, he is not. But then the NOFX frontman has always enjoyed messing with people and, in his own words, “breaking things.”

It should come as no surprise, then, that the band have released a punk rock musical concept album that tells a story about survival and love among runaway teenagers living on the streets. It features music and lyrics written by the NOFX frontman as well as collaborations with Frank Turner, Alkaline Trio’s Matt Skiba and the late No Use For A Name frontman Tony Sly

Now you know about Fat Mike’s twisted take on Annie, it’s time to take a look back through his band’s huge back catalogue and salute one of the most original voices in modern day punk rock…

LIBERAL ANIMATION (1988, Epitaph) Some bands arrive fully formed on their debut album. Others take time to refine their sound. NOFX definitely fall into the second category. Their first studio album is shitty punk incarnate. The songs are fast and loose, and sound like they’re being played by amateurs. Fat Mike was yet to find his snarling, sarcastic singing voice (he sounds like a strangled cat on speed here), and lyrically he’s a world away from the sophisticated tongue-in-cheek agitator we’ve come to know and love. Material like Vegetarian Mumbo Jumbo and On The Rag resign Liberal Animation to the annals of juvenility (even by NOFX standards), but for hardcore fans there’s plenty of early NOFX hallmarks to savour. Besides, all bands have to start somewhere, right? Essential track: Beer Bong

**S&M AIRLINES (1989, Epitaph) **This is NOFX’s metal album. Even the cover is metal. And the guitar solos are pure metal. It’s by no means a classic NOFX record, but it’s a notable step up from Liberal Animation – both musically and lyrically – and you can definitely hear Fat Mike maturing as a songwriter. Tempo changes replace the one dimensional pace of their debut on tracks like Professional Crastination, and you can hear the ska influence they’d develop on later albums creeping in (Life O’ Riley). Fat Mike’s affection for kinky sex (S&M Airlines), drugs (Drug Free America), clowning (Scream For Change) and politics (Jaundiced Eye) reach new levels of edification too, and you even get a humorous cover of Fleetwood Mac’s Go Your Own Way thrown on the end. It’s patchy, sure, but then punk was never meant to be slick. Essential track: Vanilla Sex

**RIBBED (1991, Epitaph) **Apart from the prophylactic themed title and cover, Ribbed is noteworthy for being the last NOFX album to feature guitarist Steve Kidwiller. It’s also the last produced by The Legendary Starbolt, aka Brett Gurewitz (Bad Religion guitarist and founder of Epitaph Records). The songs are still sloppy, and rely heavily on dirty jokes and cheap laughs over memorable hooks and complex arrangements. But if you’re the kind of person that finds fake boobs (New Boobs), STDs (Gonoherpasyphilaids), disdain for personal hygiene (Shower Days) and antisocial idiots (The Moron Brothers) funny; you’ll find an abundance of amusement here. And if early 90s skatepunk is your bag, it doesn’t get much more rifftastic than this. A decent full stop on the first incarnation of NOFX. Essential track: Green Corn

WHITE TRASH, TWO HEEBS AND A BEAN (1992, Epitaph) For our money, this is NOFX’s best album. It has everything; musical eclecticism (melodic punk rock, hardcore, ska, blues and jazz), satire (Please Play This Song On The Radio), parody (Straight Edge) sexual politics (Liza and Louise), humour (Johnny Appleseed), social observation (Bob), and heartache (The Bag / She’s Gone). It was also the first to feature El Hefe (guitar, trumpet, backing vocals), who lifted the band to a higher plane of precision punk rock, and his presence can be heard from the moment Soul Doubt kicks into gear. He shreds his way through the solo like a man on a mission, and over the next 12 songs renders everything that preceded him obsolete. Fat Mike’s song writing blossomed around this time too, and this record cemented his place at the forefront of punk rock elite. Essential track: Stickin’ In My Eye

**PUNK IN DRUBLIC (1994, Epitaph) **1994 was a big year for punk. Green Day released Dookie. The Offspring unleashed Smash. And NOFX stepped up with Punk in Drublic.The 17 songs contained on their fifth studio album captured the band at the peak of their creative powers. Ryan Greene (who produced the next four NOFX albums and later went on to work with everyone from Megadeth to Usher) replaced Mr Brett behind the production desk, and he brought a new found polish and a sheen to the band’s sound. The rudimentary immaturity of their previous efforts was replaced by a gravity and depth. Fat Mike tackled a range of earnest topics successfully in the lyrics; politics (Perfect Government); religion (The Brews); race (Don’t Call Me White); prostitution (Lori Meyers); and poverty (Scavenger Type). And the sharply-focused musicianship on display throughout the album is exemplary, from the pacy hook-laden hardcore punk of the album’s opening track (Linoleum), to the steel drum-tinged reggae of My Heart Is Yearning. Put simply, this album is a mandatory purchase. Essential track: The Brews

**HEAVY PETTING ZOO (1996, Epitaph) **This album saw NOFX progressing and experimenting with new sounds. Philthy Phil Philanthropist may be the only punk rock song to feature a xylophone. Bleeding Heart Disease has a doo-wop breakdown. And the hilarious Hot Dog In A Hallway flips between soft and heavy guitar work to great effect. But they also kind of lost their way with this album, and reverted back to the adolescent subject matter of their early releases. Hobophobic (Scared of Bums) is an infantile attack on homeless people. August 8th is a puerile track marking the death of Jerry Garcia from The Grateful Dead. And What’s the Matter with Parents Today is a crappy hardcore song about how kids don’t “drink or fuck or fight” like they did back in the day. It’s a confusing collection of songs. And after the previous two releases, a disappointing one. Still, you have to admire the band for shunning mainstream success so belligerently when they could’ve easily cashed in. They put a man fingering a sheep on the cover for chrissakes. And the album has absolutely nothing to do with animals…at all. Essential track: Whatever Didi Wants

NOFX & Friends’ Home Sweet Home album is out now through Fat Wreck Chords. Come back next week for the second part of our Ultimate Guide and a review of the album.

You can listen to The Punk Show every Sunday at midnight on TeamRock Radio. For more details, click here.