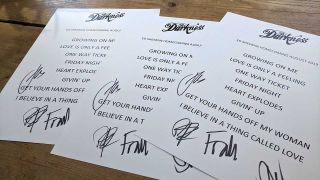 If you've read the current issue of Classic Rock – and if you haven't, why not? – then you'll be familiar with the recent adventures of The Darkness, as the band venture to Ipswich to promote their remarkable Easter Is Cancelled album, and to play a series of homecoming gigs with fellow East Anglian Ed Sheeran.

We were there on the opening day. What a day it was. They came, the rocked, they conquered. And then they signed some setlists.

We've got three of these setlists, which feature Darkness classics like Black Shuck (named after a terrifying local beast), recent hit single Heart Explodes, and I Believe In A Thing Called Love. And they've been hand-signed by Justin Hawkins, Dan Hawkins, Frankie Poullain and Rufus Taylor.

Would you like to win one? We bet you would. All you have to do is answer the staggeringly simple question below, and our Quantum Computer Of Rock will select three winners after the closing date (noon on November 8).