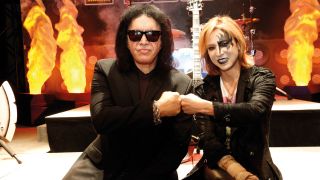 Yoshiki bros down with Gene Simmons, one of his inspirations

Fresh from headlining London’s SSE Arena in Wembley, X Japan have released their own documentary – We Are X. Featuring cameo appearances from Marilyn Manson, Gene Simmons and Limp Bizkit guitarist Wes Borland, it documents the band’s triumphs and tragedies, from making multiplatinum records to mourning the loss of members. Inspired by Kiss and another American rock acts, the band formed in the early 80s and became megastars in their home country, though remain less known internationally.

“I think that people who’ve never heard of this band will watch this film and have their minds blown,” says US film-maker Stephen Kijak. “This is a band that gave a generation of people a new kind of freedom that they never had before. X Japan were a real ‘fuck you’ to society, they shifted social and cultural norms, and became the most beloved band in the country.”

By his own admission, Stephen had never heard of X Japan when he was approached by producer John Battsek in 2014 with the idea of making a documentary about the band. A matter of weeks later, Stephen was at Yokohama Arena watching Japan’s biggest rock group dazzle 17,000 fans at their first homecoming show in three years, and was blown away by the spectacle: “I couldn’t believe my eyes and ears, and I needed to know more about this,” he laughs.

John’s film company, Passion Pictures, have trained their cameras on subjects as diverse as film legend Marlon Brando (2015’s Listen To Me Marlon) and cult US musician Sixto Rodriguez (2012’s Oscar-winning Searching For Sugar Man), and from his first phone conversation with X Japan mainman/drummer Yoshiki, Londoner John was convinced that he had a story that transcended traditional rock’n’roll narratives.

The film covers Yoshiki and frontman Toshi’s meeting at kindergarten in the Tokyo suburb of Chiba, through to the band’s triumphant headline appearance at New York’s prestigious Madison Square Garden on October 11, 2014. Along the way, the band faced great misfortune, including injury and death. Stephen, who worked with Metallica’s Rob Trujillo on Jaco, 2014’s acclaimed biography of jazz great Jaco Pastorius, was able to draw upon more than 30 years of largely unseen archive footage for what he considers “a really privileged perspective” on the cult Japanese superstars.

“It was a total revelation to me, and anyone watching will come out with a real love and appreciation of the band, and a real empathy with Yoshiki,” he explains. “He really does anchor the film, to where it becomes less a story about a band than about a man and his journey through his own pain, and about the transformative power of art and music, which I think makes it more universal. It’s a very moving and intimate meditation on death and grief and the healing power of music, and it’s to Yoshiki’s great credit that he trusted us with his life.”

The We Are X soundtrack is out now via Sony Music’s Legacy Recordings. The DVD is out on May 1, see www.xjapanmusic.com

What does Yoshiki think about the X Japan movie?