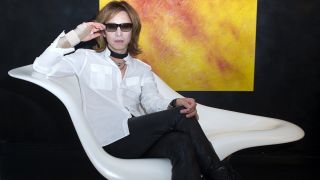 Yoshiki Hayashi is an extremely busy man. He co-founded X Japan - one of the East’s most influential metal bands, was a pioneer of the image-led visual kei movement, inspired a comic book, created his own jewellery line, wrote a theme tune for America’s Golden Globes and even has a collection of lavish crystal pianos that Axl Rose would be envious of. But ask him about his early ambitions and he giggles coyly: “I was a huge fan of Iron Maiden and Led Zeppelin, so I just wanted to rock!”

So modest is this softly-spoken musician that you’d never imagine the likes of Dir En Grey, Vamps and Mucc owe their careers to the visionary metal band he led. Four decades on, it’s difficult to appreciate just how much adversity X Japan fought against back in the day.

Yoshiki began his musical training on classical piano at the tender age of four but when his father died a few years later, something changed in him. “I felt very angry and needed to do something to express this,” he remembers. “Then I found rock. I asked my mother to take me to see Kiss when I was 10 years old… It was my first rock concert and it changed my life! I was only listening to classical before then so to see Gene Simmons spitting blood on stage was very shocking for a 10 year old but I thought they were all so cool. So my mother bought me a drum kit and I started to learn the drums. It was perfect timing.” Just one year later, Yoshiki formed his first band with his school friend Toshi and, within the space of five years, the pair had created their metal act, X.

Back in the early ’80s, the big Japanese metal bands Bow Wow, Loudness and the theatrical Seikima II all worshipped at the alters of NWOBHM and American thrash, not just through their music but also their image. By contrast, X Japan took these heavy sounds and mixed them with a pinch of punk and a bucketful of David Bowie’s glam rock persona Ziggy Stardust to create a look that was part-British punk, part-manga superhero and heavily inspired by Kiss. He reveals: “Our slogan at the time was ‘Psychedelic Violence Crime of Visual Shock’ but it was the journalists who started using the phrase ‘visual kei’ to describe bands like us.” Those other bands included Color, fronted by Dynamite Tommy whose former label Free-Will was once home to Dir En Grey, and, in the 1990s, Malice Mizer. Their cross-dressing guitarist Mana created the fashion and lifestyle movement Elegant Gothic Lolita. “The way I see it, visual kei isn’t just about wearing crazy make-up and outfits,” says Yoshiki. “It’s about being free to be who you are and do anything you want. There are no rules in rock.”

The problem is, not everyone was on the same page and X Japan found themselves not only criticised for mixing hard rock with ballads but also for wearing make-up while playing them. Had they never heard of Alice Cooper? The band’s ‘fuck it!’ attitude resonated with their fans who helped them to eventually flog around 30 million records and sell out the Tokyo Dome baseball stadium multiple times. And what did Yoshiki spend his earnings on? A collection of glamorous crystal pianos and a drum kit, all chosen because of the way they reflect the coloured lights on stage. He also famously bought Hollywood’s One on One studio. “Everyone told me it had the best acoustics for drums but Metallica were recording the Black Album so we couldn’t get in there,” he recalls. “The only way to get a booking was to buy it… so I did!” He re-named the studio Extasy, after his record label but recently sold it to buy a more modern base.

X Japan called it a day on New Year’s Eve 1997 and less than six months later, their guitarist Hideto ‘Hide’ Matsumoto passed away. “I was very shocked,” Yoshiki recalls, “so I decided to quit being on stage and become a producer. I had a friend who was managing a new band called Dir En Grey and he asked if I would produce their record. I wasn’t sure but then I met them and I thought they were so cool … their guitarist Kaoru loved Hide and they kind of reminded me of X Japan in our early years so I said ‘yes’.” Yoshiki produced five singles that later appeared on the band’s 1999 debut album Gauze and his enthusiasm for the band, whose ninth album is due this year, is still apparent. “I feel very lucky to have worked with them,” he says. “We might have inspired them at first but now they inspire me, it’s like a full circle.”

After 10 years, X Japan reformed and the drumming pianist returned to the stage with a North American tour following a few years later: now they’re putting the finishing touches to their long-awaited comeback album. Meanwhile, Yoshiki is retracing his roots; he’s already released three classical albums and has just begun his very first world tour. As a warm-up, he performed with a hologram of himself at SXSW in April and is currently plotting a holographic battle royale where he will be able to play both drums and piano. “I see so many parallels between classical music and heavy metal, especially in the song structures,” he explains. “Some metal songs are very intricate; they have a complex structure and I think that came from classical music so there’s a lot of similarity between the two.”

Yoshiki Hayashi’s career certainly isn’t that of your average metal musician and his schedule is crammed with so much more, yet despite everything his number one goal remains the same.

“I’m still one of those rock kids,” he confesses, “and I just love rocking!”