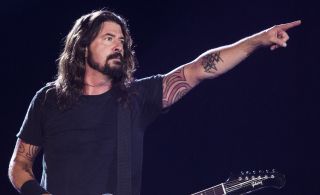 I know what you’re thinking. You’re thinking “Actually, buddy, I think I am well up to the job of criticising the Foo Fighters, thank you every much. In fact, I am more than capable: over-qualified, really.”

You’re thinking: “I have been thinking about this for longer than is healthy and I’m pretty sure that I’ve got their bastard number, sunshine.”

I, too, once saw the world in such simple terms. But then I went to see the Foo Fighters and the scales were lifted from my eyes. The truth is, we’ve been out manoeuvred, pal. You’ve forgotten something: Dave Grohl is one of us and he’s already worked out all the angles. He’s way ahead of us.

Criticism no.1: The Foo Fighters have got no songs

“Has there ever been a major, stadium-level band who have gotten this far with so few great songs?” you say. And it sounds like a fair point. The Foo Fighters have had very few hit singles. They’ve released 36 singles in their 24 year career, only four of which made the UK top 10 (The Best Of You got to no.4 in 2005).

They have some great songs – Everlong is gorgeous (with that elegiac Stairway-like 'And I wonder...'), Monkey Wrench blazes, The Best Of You is turned into an epic singalong that continues into the encores and spills out into the streets of Stratford afterwards – but they don’t have That One Song that everyone knows, a massive modern anthem like a Sex On Fire or a Don’t Look Back In Anger, let alone a Boys Are Back In Town, Freebird, Whole Lotta Love, Whole Lotta Rosie or Smells Like Teen Spirit.

And B) get this: the Foo Fighters know that. In concert, a large part of the evening is dedicated to fannying around and playing REALLY BIG SONGS that everyone knows. Grohl knows their achilles heel would be exposed if he insisted on running through album tracks from Wasting Light so in London last week they brought the party by playing Blitzkrieg Bop, Another Bites The Dust, Under My Wheels, a snatch of You’re The One That I Want from Grease, and a mind-twisting mash-up of Imagine and Van Halen’s Jump.

They don’t have the songs so they bring someone else’s. For one night, they are every rock band – a mash-up of every band that came before (and their crowd has never seen), and they revel in it. The fun they’re having is infectious.

This is my third big show in as many weeks and it’s easily the one with the best atmosphere. “I don’t how this band got this big,” says Grohl, “but I’ll fucking take it!”

Criticism no.2: They lack personality – in their music and as a band

“They’re not a proper band – it’s the Dave Grohl show.” There is something in this too – a feeling that Grohl’s sheer force of personality (his, um, Big Dick Energy) has lifted this anonymous band to a different level.

Compare and contrast: Guns N’ Roses have Slash, Duff and Axl – each famous and loved and/or hated in his own right. (The members of Guns N’ Roses are so unique and storied that people are actually boycotting them because the rhythm guitar player is missing.)

The Rolling Stones: sure, you have Mick and Keith, but then there’s Charlie and Ronnie – each member with a history and a story attached – and you’re rooting for them all. It’s them against the world!

The Foo Fighters? Well there’s Dave and Taylor, the Mick’n’Keith of hitting stuff, and then there’s.. uh… that old guy who was in some punk band and, y’know, like, a couple of other dudes. Actually, there’s three Other Dudes. The Other Dudes are so indistinct that they added keyboard player Thingumy Bob last year and no-one even noticed. When Kiss Guy joined them onstage at a gig in Austin a couple of months back, his sheer enthusiasm made The Other Dudes look like spectators.

Again, Grohl knows this. He spends a chunk of the show (the fannying-about bit) introducing Biff, Chip and Buck and giving them some time in the spotlight. He’s trying to make them interesting. They just don’t want it. They’re self-conscious, from a generation that sneered at rock star bullshit and don’t really want to get sucked in to trotting out the same old cliches.

There is no fucking way in God’s green earth that Nate Mendel is going down the Ego Ramp to do a bass solo – and that can only be a good thing.

LONDON....It's happening again!!! SOLD OUT @londonstadium . Doors are open and @SLAVES up now! 6:25 @thekills 8:00 #FooFighters . 📷 @rosshalfin . Please note all customers will be searched on entry and to make entry to the venue as swift as possible we encourage all customers to NOT bring a bag with them. Any bag larger than A4 will not be allowed in to the venue and there will not be a bag drop facility in operation. Foo Fighters

Criticism no.3: They’re not Proper Rock

Here’s a secret: the Foos management hates the band being associated with anything ‘rock’ or ‘classic rock’. They think it taints their image somehow. They see the Foos (and stable mates Queens Of The Stone Age) as punk rock, as modern alternative acts that belong on the cover of, uh, the Melody Maker, or NME or some other magazine that no longer exists.

It’s a marketing angle – stay cool for the kids, forget the dads – but you could say that they are, ironically, being nostalgic for a golden age of alternative rock that has long since passed. (As Taylor Hawkins told Beats this week: “There’s no more alternative rock anymore, we’re just a bunch of dads playing music now.”)

But still the band bristle at being called ‘rock’. A few years back, the public voted them Band Of The Year in the Classic Rock Awards. They sent a slightly sneery video tape: “Oh, so we’re classic rock now?” This from a band who play Van Halen’s Jump, Queen's Another One Bites The Dust and Alice Cooper’s Under My Wheels onstage, a stage that in the past they’ve shared with members of Queen, Led Zeppelin and Guns N’ Roses.

The interesting thing is that they’re great ambassadors for rock music. Rock is in decline at the moment – certainly when it comes to cultural relevancy – largely because it’s the music of Old White Men. And being an Old White Man, let alone an Old White Rock Star, is probably the least coolest thing you can be right now.

People have always laughed at old rock stars – they’ve been joking about the Stones needing zimmer frames since the 80s – but post-Weinstein there’s a genuine suspicion about these ridiculous old guys with their hairy chests and too-tight trousers bellowing about bitches on stage and finding new and inventive ways to abuse (willing) women backstage.

The kick back against that came a long time ago. A new breed of rock star came along that was less Alpha Male. Sensitive, stylish, less ego-driven. And, you know, more boring.

Grohl, meanwhile, is the New Alpha male. His is a masculinity that isn’t toxic, that makes everyone feel good. He dad-dances across the stage, blowing kisses, singing about his ordinary hero and you realise: he’s singing about himself.

His performance is ballsy but egoless. It ain’t snowflakey – it’s coy, funny, sweaty, cathartic. And he gives up a lot of himself too: where some rock stars suck their cheeks in and play the strong silent and mysterious type, Grohl gives it up. The band have, actually. They've dressed up as women, as gay truckers, they've taunted the Westboro Baptist Church and basically used their video budgets to be as stupid as possible.

Grohl is not interested in what you think of his cheekbones – he wants you to have a good time.

We’ve been on a journey with Grohl: from Nirvana, through Foos, QOTSA, Probot, Tenacious D. We know he gets it. He’s a rock’n’roll lifer like us – and he knows how we think. He's the rock star we need right now.

Can someone just give him a couple more songs to play with?