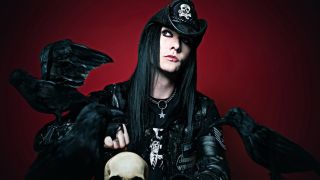 Wednesday 13 – real name Joseph Poole – was like any ordinary kid growing up in America in the early ‘80s, gently cultivating an obsession with action figures and cartoons. But, as he explains, the country songs which played on his parents’ radio has had a lasting influence on his own music career.

“I was a little country redneck kid and I lived in North Carolina up until five years ago. If you live in the South, you can’t get away from country music, even if you wanted to. It’s just there. When I was a kid, I was obsessed with toys and cartoons, but I heard the music. It was just background music for the most part, but there’s certain songs that resonated with me. There were certain songs that my mom or my dad were into and I thought there must have been something in it. My parents would play it all the time, like Top 40 ‘80s country. A lot of it wasn’t bad. That’s the stuff I grew up listening to and I cut my teeth on that until I was old enough to rebel. I thought, ‘I don’t want to like what my parents like’, so that’s when I discovered bands like Kiss and Alice Cooper.

“But I’ve always liked Johnny Cash, Waylon Jennings and Hank Williams Jr. They were my three favourites of that era. I even saw Johnny Cash on Sesame Street once! Even now, those three are my favourites. And for all the horrible country music these days, there’s a handful of good bands. I think the Zac Brown Band are awesome.”

“As far as Waylon Jennings goes, one of my favourite songs is I’ve Always Been Crazy. I can relate to that. It’s a really cool song and he put that record out in 1978 – it just wasn’t your typical country. It was kinda country, but it was upbeat rock too. It’s what I think of when I think of country, it speaks to me like that. I love everything Hank Williams Jr did, he was just the real deal.

“They did it first, and they did it better than anyone else. They set the bar and they’re Kiss and Alice Cooper of their genre in my book. Everyone looks up to them, and they went through all the eras and survived them all. They always came out on top. You can’t deny that.”

“My parents didn’t take me to country concerts. My first concert was Dr Feelgood when I was eleven! My parents would go to these shows and they would come back and tell me how crazy it was. My mom told me she saw Hank Williams Jr once and he came out on stage so drunk that he threw a chair into the crowd, and it hit my aunt in the face. I thought that was awesome! A lot of those guys were rebellious. You read stories about Hank Williams Jr or Waylon Jennings and they rival anything from any rock band. They’d even give Mötley Crüe’s The Dirt a run for its money.

“Country definitely has had an influence on my music. Bourbon Crow [a country side project with Murderdolls bassist Rayen Belchere] was a celebration of being a fan of those artists and doing it our own way. Whenever I did an acoustic show I didn’t have anything to base it on. I thought, ‘How do you do an acoustic show?’ so I learned through watching country bands. It’s a double edged sword; I have my acoustic side, and my live metal side. Having that in my blood definitely helped.”

“I’m a southern goth rocker and I think it shocks people when they hear I’ve done a country album, but I’ve never played by any rules. I’m a weirdo. I can do country, I can do metal, I can do punk. I feel pretty good that I can do what nobody else is doing.”

Wednesday 13 was speaking to Gavin Lloyd for TeamRock. Wednesday’s new album, Monsters of the Universe: Come Out and Plague will be released on January 12.