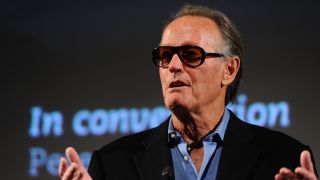 From the moment that biker outlaws Captain America (Peter Fonda) and Billy (Dennis Hopper) roared across the big screen on Harley choppers, hair flying in the wind as Steppenwolf blasted Born To Be Wild, both actors and audience knew they were in for the ride of their lives…

At a time when Hollywood’s typical music film was Beach Blanket Bingo, Easy Rider puffed marijuana smoke in the face of the establishment on its release in July 1969. Sure, there were biker flicks, Elvis movies and Beatles films, but in the main they were shot by squares to make a fast buck from the kids. This time the freaks were on the other side of the camera, with Hopper directing and Fonda producing. The pair brought the authentic voice of the counter-culture to the mainstream, with a sense of artistic freedom, a very loose script with ad-libbed dialogue, real-life extras and a hip cameo in the shape of Phil Spector.

At the centre of it all was a soundtrack of the finest American rock of the 1960s including Jimi Hendrix, The Byrds, The Band, Electric Flag and a Bob Dylan song performed by Roger McGuinn.

Peter Fonda, whose “We wanna be free” speech from The Wild Angels was sampled on Primal Scream’s Loaded, was in London last week to present a screening of Easy Rider. He shared his memories of making the film, which was financed, ironically, by the producer of The Monkees TV show. “I like to say ‘Monkee money made Easy Rider’,” grinned Fonda.

Although he greatly admired his partner, Fonda said he was “frustrated” by the notoriously volatile Hopper, who pushed their friendship to the limit from the first morning on set in New Orleans on February 23, 1968.

Fonda, whose acid trip with The Beatles inspired She Said She Said, revealed that the joints in Easy Rider were genuine. “It was pot that David Crosby had given me. And Crosby had the best.”

The coke, however, wasn’t the real thing, but powdered sugar.

Crosby, Stills & Nash were also set to contribute a musical score, but Hopper took exception to Stephen Stills picking him up in a limo, an incident he recalled with typical diplomacy in a documentary shortly before his death in 2010. “Stephen, this isn’t gonna work… anyone who drives a limo can’t understand my movie. You come around here again and I’m gonna kill you.”

Instead, Hopper hand-picked tunes from his personal record collection and matched them to scenes in the film, compiling a classic rock soundtrack that was as outrageously popular as the film itself and has kept its legacy alive.

Although one track almost didn’t happen, as Bob Dylan at first refused to let them use It’s Alright, Ma because he didn’t like his harmonica playing. Fonda said he had had to bring his tragic family history to bear, and told Dylan: “’My mother committed suicide in an insane asylum by cutting her throat from ear to ear.’ Bob sat back a bit. ‘I want to hear, I need to hear, Suicide remarks are torn from the fool’s gold mouthpiece, the hollow horn plays wasted words and proves to warn that he not busy born is busy dying’ [lyrics from the song]. Bobby could not duck that.”

Although the biker outlaws ultimately ‘blew it’ and are destroyed by gun-toting rednecks, Easy Rider still stands as the film that captured a generation and the defining moment that sex, drugs and rock’n’roll broke on through to the other side.

Dennis Hopper: Icon of Oblivion film season runs at BFI Southbank until July 31. The Lost Album, an exhibition of Dennis Hopper’s 1960s photography, is at the Royal Academy until October 19.