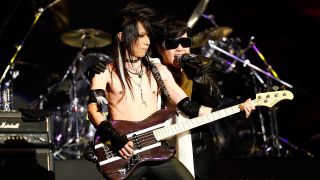 Floor tickets for their autumn show at Madison Square Garden sold out in the space of an hour and Babymetal probably wouldn’t exist without them... Natasha Scharf asks: Who The Hell Are X Japan?

They’ve Been Around Since The 80s

X were formed in Tokyo in 1982 by piano-playing drummer Yoshiki and frontman Toshi. Inspired by classic American and British metal, glam and punk, they dreamed of being big rock stars just like their idols Iron Maiden and Kiss. The cursory name was supposed to be a temporary thing until they thought of something better but it stuck and they added the ‘Japan’ part ten years later to avoid confusion with the American punk band of the same name.

They Invented A Scene

Kinda… X Japan describe their iconic glam-punk image and rule-breaking attitude as: “Psychedelic violence crime of visual shock.” It was a bit of a tongue-twister, so some journos came up the snappier heading of “visual kei”, which they unexpectedly became pioneers of. “[It] isn’t just about wearing crazy make-up and outfits,” drummer Yoshiki once said. “It’s about being free to be who you are and do anything you want.” The band swapped their glamtastic look for something a little more subdued in the mid-90s, but have never forgotten their visual roots.

With their huge hair, Mad Max stagewear and Japanese warrior make-up, X Japan originally looked more like manga characters than their heroes Kiss. That look not only inspired comic and anime artists but Yoshiki even has a graphic novel based on him called Blood Red Dragon, which was created by Spider-Man and X-Men legend Stan Lee.

X Japan have headlined 18 sold-out shows at the 55,000 capacity Tokyo Dome so far and have sold more than 30-million records worldwide – not bad for a band that early critics accused of being all style and no substance.

They Split Up And Then Reformed

X Japan officially split in 1997 and performed a farewell concert at the Tokyo Dome that New Year’s Eve. The band members went their separate ways and embarked on solo careers but just a few months after calling it a day, their guitarist Hide died and any thoughts of a reunion seemed impossible. Fast forward ten years and X Japan realised they weren’t done yet. They even released a comeback single I.V in January 2008 – it was used as the theme for the movie Saw IV – and gradually began playing live shows, some of which featured a hologram of Hide.

They released another single Jade in 2011 and there have been rumours circulating about a new studio album ever since. “I know I’ve been saying this for the last ten years but hopefully it’ll be out this year,” Yoshiki teased in May, so watch this space!

And They’ve Left A Huge Musical Legacy Behind Them…

Not only were they the first Japanese rock band to break the US market but X Japan have been hugely influential on Japanese metal as they’ve flitted between hard rock, glam metal, progressive and even symphonic styles. Dir En Grey are huge fans – Yoshiki even produced some of their early material – and their distinctive sound, style and attitude has helped pave the way for the likes of Mucc, D’espairsray and even Bo Ningen.