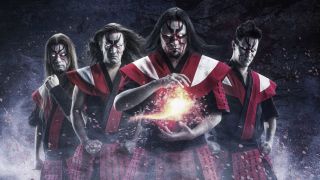 What do you get when you combine melodic death metal, power metal, folk metal and several metric fucktons of ancient Japanese cultural trimmings? The answer probably should be “a massive fucking mess”, but Finland’s Whispered have somehow conspired to combine all those elements into something that is both thrillingly epic and brilliantly ludicrous. New album Metsutan - Songs Of The Void is a bombastic rush of balls-out heavy metal showboating, precise aggression, incisive melodies and, erm, several thick wodges of Samurai shtick. Quite how this has emerged from Finland is anyone’s guess, but Whispered pull the whole preposterous enterprise off with great style. Crank it up and watch out for ninja attacks.

Want to know more about the album? Vocalist and guitarist Jouni Valjakka has written this track by track guide to Songs Of The Void for you!

“The play begins with an ominous introduction preparing the stage for a striking first act. The atmosphere in the kabuki theatre is menacing yet vacant.”

“An estimation of a sublime, prodigious strike with a sword. Notions about unmatched devotion, honour and giving everything you’ve got to reach it. This is a great song for gym and bar fights!”

Exile Of The Floating World

“A twisted oriental hell-ride where we dive into the mind of a maddening artist. Inspired by the woodblock print artist Yoshitoshi, the song dwells in the midst of absolute lunacy, inspiration and the artist’s despise of the modern art-world. It’s tricky but a really fun song to play!”

“Every warrior has to die some time. This is a story of a resolve, failure and spirit’s victory in defeat. Let the journey to the beyond begin. Brass takes over in the end; Zimmer approves.”

“A song inspired by the first duel of no other than Miyamoto Musashi. It’s about how one’s dedication from something little broadens to monumental skills and a vision to fight through everyone and everything. This song has so much different stuff, it’s almost illegal. Prepare to shout ‘sword saint’ with us live!”

Our Voice Shall Be Heard

“When a remote shrine is disturbed by the touch of a human, chaos reigns. All kinds of foul spirits show us that a man doesn’t own the land. We couldn’t help but succumb to some certain progressive Swedish vibes while creating the ghostly atmosphere.”

“A moonlit stage is set for an honourable death that thousands of wraiths have come to witness. A servant has bid an utterly evil master for a lifetime; ‘Maybe if I take my own life, my lord will finally see?’ I think we managed to get just the right mood in this song. It has some glimpses of hope in the middle of hate and despair.”

“Only some spirits and small beings are witnessing the army’s great march through the mountains. The scenery stays intact and our battles do not change anything. It’s instrumental with heavy use of bamboo-flute and orchestra – for relaxing times, make it Warriors Of Yama time.”

“Endeavours of a great warrior have come to an end. The old man reflects his life and everything that happened during the endless wars. The concept of the song is the idea that winning doesn’t teach anything. It’s maybe the most ‘basic’ song on the album with catchy melodies and some manly choir stuff!”

“For thousands of years, a dragon Gozuryu has tormented a peaceful village, so the Goddess Benzaiten descends to confront the beast and help the people. The dragon falls in love with the Goddess, but is rejected. Through tremendous anger the serpent finally sees what he has done, falls in shame and turns into a mountain. The song is inspired by famous Japanese folklore. It’s really an orchestra-driven fairytale divided into five acts, while reflecting everything that’s happening musically. It’s also the most ambitious song we’ve ever made.”

Metsutan – Songs Of The Void is available May 20, via Redhouse.