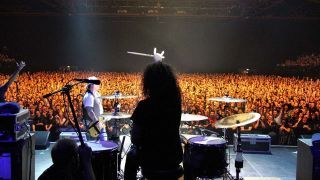 Most rock photographers are allowed to shoot three songs from the pit before being asked to leave the venue. They rarely shoot sets at their climax, and even their best photos are often shot from below, looking up. What they don’t get is onstage access, and the ability to shoot while looking out.

David Phillips has that kind of access, having spent years making friends and cultivating contacts. He shoots from the stage, and he specialises in drummers, getting the kinds of shots very few others can. His latest photographs are gathered in From The Riser: A Drummer’s Perspective II, a sequel to the 2012 first edition.

“Not many photographers have captured that performance art as well as David,” says Peart. “One accomplishment is simply collecting photographs… but the greater gift is delivering such iconic images.”

“The book is a photographic celebration of many of today’s greatest rock drummers and percussionists,” says Phliips. “It unashamedly captures the energy, emotion and elegance of the world’s best, playing with the world’s greatest bands. To get shots like this you have to understand drummers, drums and playing live.”

Copies of From The Riser can be ordered from David Phillips’ website.