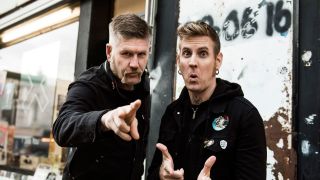 “Usually, for me it’s about buying a band that I don’t know, especially when I was a kid. Record shopping always brings me back to my youth.”

Mastodon guitarist Bill Kelliher is thumbing through the vinyl selection in Rough Trade West in London’s Ladbroke Grove. Looking up, he spots the original gig poster for the Ramones, Talking Heads and The Saints at London’s Roundhouse from June 1977 on the wall above his head.

Kelliher, who was turned on to music as kid by American punk, with artists such as the Dead Kennedys, Black Flag and the Ramones fuelling his desire to form a band, lets go a low whistle. “Imagine getting a time machine to go back and see that gig,” he says.

Rough Trade West, the cornerstone of the Rough Trade empire and their first shop, opened a year before the Ramones headlined that Roundhouse gig. Noticeably less salubrious and much smaller than their glitzy East London branch, nonetheless Rough Trade West is a record buyer’s paradise, with its floor-to-ceiling vinyl and CDs, walls tagged with classic gig posters and sleeves, a record deck and headphones set to one side near the counter to try before you buy, and downstairs a basement filled with second-hand listenables.

Almost instantly, Kelliher disappears downstairs and out of sight.

Brann Dailor, Mastodon’s drummer, spots the Tom Waits section and starts rifling through the racks. Like Kelliher, Dailor grew up in the suburbs of upstate New York near Rochester, and both men’s formative years were spent hanging out in record stores.“The first record I ever bought with my own money, when I was seven years old, was at a place near me called Record Archive,” he remembers. “I got Iron Maiden’s Piece Of Mind. I bought it because of the album cover, that cool-looking monster,” he says of Maiden’s infamous Eddie mascot. “Then I went down into their bargain basement and I got Destroyer by Kiss and Back In Black, but Maiden kind of won out. I liked the AC/DC and Kiss too, but Maiden really spoke to me for some reason.”

“All my friends were into Iron Maiden, but I couldn’t get into it at all”, says Kelliher, back from the basement and standing across from Dailor, head down, assiduously working his way through the vinyl again. “The vocals were too clean for me, and I was listening to punk rock at the time and it seemed too operatic and so out of reach. They were such a huge band.”

It’s 17 years since Kelliher and Dailor moved across the US from Victor, New York to Atlanta and met up with bassist Troy Sanders and guitarist Brent Hinds and formed Mastodon. Two years later they released their debut album, Remission, a record that felt like a wall falling on you, pulverising the listener with tracks like March Of The Fire Ants and Mother Puncher. It was as intense, inventive and as unhinged as the band that made it. Subsequent albums flew into and out of the cosmos. They sang about Moby Dick, dropped pills, swum among the stars, played prog, made metal, and spent the best part of two decades crafting their art and building their legend. Their latest album, and arguably their best yet, Emperor Of Sand, is a concept record about, Dailor says, “a guy who’s lost in the desert. He’s been given this death sentence and he’s running from that and starving, and he’s thinking about his family and some of the last moments with people he’s close to…”

So far, so very Mastodon. But during the making of the album, Kelliher was losing his mother to cancer, so the notion of loss, estrangement and loneliness prevalent in the concept and the songs came, he says, “from a very real place”.

While looking through a rack, he pauses, examining the sleeve of a record by a band called Nucleus, and nods approvingly. Later that day he will decide to make it one of his purchases.

“I spent so much time trying to make it sound the best it could, and it also kept my mind from not going completely mad thinking about mom. Emperor Of Sand was what I did in-between taking care of her and visiting her. Even when I was looking after her in the hospice, I still had my guitar rig and I was still writing at her bedside, playing into my laptop. There was nothing much I could do for her. She was just breathing, she was dying.

“I had to do something to keep me from going absolutely bonkers and crying my eyes out,” he continues. “I tried to turn all the energy into something positive. So this record will always have that memory of mom in there. I didn’t have to reach for any inspiration, it was this feeling of ‘What the fuck?!’ Her life, that was my inspiration.”

Dailor, having made a circuit of the shop, is back considering a handful of Tom Waits albums he’s picked up.

“You have to find your way into Tom Waits,” he offers. “I heard him when I was a kid. My dad listened to him, but I didn’t really get it until around 1991 when I heard the first Mr Bungle album”, he says. “That turned me on to Zappa and Waits and all of that stuff. That record changed my musical trajectory totally. It brought me back to even the stuff my parents listened to when I was a kid: old Genesis, King Crimson and all the prog stuff. I love it. And I wasn’t a huge Faith No More fan until Angel Dust. I liked that, but I preferred Mr Bungle, it was wild! So stuff like Waits and Zappa were in that realm of the bizarre, but musical, but I got my real musical thirst for the weirder stuff I could find from listening to Mr Bungle.”

Emperor Of Sand was pieced together and demoed in Kelliher’s basement – at a push all four members of Mastodon can fit in there. By his own admission, he started making music in a basement and he’s pretty much stayed there ever since.

“My basement now is a lot smaller, my wife wouldn’t let me have the whole place. But if I have an idea in bed at night, which is when the riff fairy usually comes along, instead of waking the wife and humming into the phone with some crazy idea, I have the option of going into the basement to record.”

Dailor, who is standing nearby, catches the conversation and leans in. “The parents’ basement is where a lot of bands begin,” he says. “But Bill’s the parent now and we just hang out there.”

“As a kid I built a stage in the basement,” Kelliher continues, “and all my friends would come over and we’d write, and we’d jam on this little tiny stage with this drum riser. And I’d put on shows down there. Brann did the same thing at his house. I’ve wanted a studio in my basement since I was fifteen. Now that I’m forty-five I’ve finally built one.”

“And it still feels like that fifteen-year-old kid thing when you’re down there sometimes,” says Dailor, warming to the subject. “It really doesn’t change. You’re sifting through riffs, and it’s the same feeling when you’re a kid jamming in the basement trying to find that spark. It’s very simple. You hear an awesome riff and you go: ‘Yeah, that!’ That’s exciting. Musical cavemen, that’s what we are. And there are thousands of riffs. You’ve got to put the work in, but it’s not like it’s actual work, not like lifting boxes.

“You don’t get goosebumps from lifting boxes,” Kelliher adds.

Time is running out, and at 5pm it’s already dark outside the shop. They both begin finessing their choices, which stirs something in Dailor and carries him back to his teenage years and a favourite record store down near the water in New York State.

“Bill,” he says to the guitarist. “Lakeshore Record Exchange – remember that place? It had a lot of metal, punk and more alternative stuff,” Dailor explains. “There was an older guy in there who would make suggestions – there was one in every store – and this is a key component for a lot of young people’s musical tastes, especially if you don’t have an older brother. The guy that works at the music store, it’s his job to talk you through your selection. You know: ‘If you like Metallica, then let me hook you up. Here’s Mercyful Fate, this is Venom…’ It points you in the right direction. He was like Spotify before Spotify.”

“There was a girl who fancied me, and she was the manager of Record Theater,” says Kelliher, “and I’d hang out there and I would pick out as many records as I wanted to and she let me have them for nothing. It was amazing. And then I had an older girlfriend and she was in to stuff like Peter Gabriel, Genesis, King Crimson and Rush. I’d never heard of King Crimson. She played a lot of that for me. I thought it was crazy. Still is. It opened my eyes to all the other stuff out there.

“And when you’re a kid, money is hard to come by. You only have so much, so you have to make the right choice, and you feel terrible if you get the wrong record. It’s so different now, especially when you can get music for nothing. Back then you’d have to wait for the record to be released, save your money, go to the store on your bike, get it home, unwrap it…”

“Or that moment when you get to the shop and it’s sold out,” Dailor says, and they both wince visibly at the memory. “That reminds me of the other store guy, the one who’s worked there too long, hates every kid that walks in the door, and you’re like: ‘Is this record out yet?’ And he goes: ‘No,’ and just turns around and walks away. And you’re like: ‘Damn, that guy is so cool!’”

Emperor Of Sand is released on March 31 via Reprise Records and will be reviewed next issue.

With £50 of Classic rock’s money burning a hole in their pocket, here’s how Kelliher and Dailor spent it

Whether it’s finding a copy of an album they used to have, or picking up vinyl because of a great song title or groovy sleeve art, record shopping is as fascinating as it is fun.

“The sticker caught my eye: ‘A rock, cult, psychedelic experience making music that’s a strong mixture of organ, fuzz and acid.’ Plus they have a song called All About Me And The Spidery Bass. I’m going to figure out how to play it.”

“On exclusive yellow vinyl. Coloured vinyl is as cool as hell. I know and love the album, but I wanted the vinyl, as it means I’ll listen to it in a different and much more personal way: no distractions, no TV, same way as when I was a kid.”

“Lost my original copy years ago. It’s one of my favourite Tom Waits albums. That clicking, clacking, lots of dropping chains on tables, kicking hubcaps, whatever it is he’s actually doing, it’s great.”

“When I lived in New York in 1991, Tribe Called Quest were coming through, and it turned me on to that organic and intelligent and musical hip-hop. And Run The Jewels are very much in that tradition.”

“Electronica from this era makes me excited. Plus it’s French, which means it’s going to be super-artsy.”