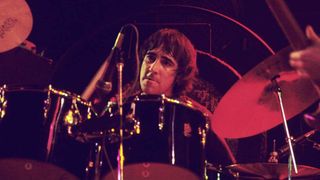 For some fans, it’s the stuff of dreams, for others the stuff of nightmares: finding yourself on stage in front of 14000 people playing with the biggest rock band in the world. But that’s what happened to 19-year-old Scott Halpin on 20 November 1973; the night he played drums with The Who.

Halpin and his friend, Mike Danese, travelled from their hometown of Monterey, California, for the Who’s show at the San Francisco Cow Palace. It was the first night of the band’s US tour, and completely sold out. They bought tickets from a tout and managed to get close to the stage. But as soon as the concert began Halpin noticed something was amiss: “You could tell Keith Moon was messed up.”

That evening Moon arrived at the venue with a young female fan on his arm. Keith was always jittery before a show, and when she offered him something to calm his nerves, he accepted.

Precisely what Moon took or even how it got into his system is still the subject of speculation. Some say it was all an accident, and he and his friend had their drinks spiked. The most popular story, however, is that Moon necked a handful of ‘elephant tranquillisers’ washed down with a glass of brandy. Either way, whatever the pair took certainly contained PCP, commonly known as ‘angel dust’, a chemical used to tranquillise animals.

Although Moon’s playing was noticeably erratic, nobody realised how powerful the drug was until his friend had a seizure and had to be rushed to hospital. Twenty minutes later The Who were coming towards the end of their set and Moon was clearly struggling.

A few minutes into Won’t Get Fooled Again he ground to a halt, like a clockwork toy whose battery had just run out.

“And then he fell backwards, and had to be dragged offstage,” said eyewitness, San Francisco Chronicle correspondent Joel Selvin.

“We’re just gonna revive our drummer by punching him in the stomach,” Pete Townshend told the audience. “He’s out cold. I think he’s gone and eaten something he shouldn’t have eaten. It’s your foreign food…”

Backstage, Moon’s roadies revived him and called another doctor. Keith insisted on going back on stage, where he tried to wrestle Townshend, before being dragged off by Daltrey. After climbing behind his kit, Moon was injected with a shot of cortisone in the ankle. But partway through Magic Bus he passed out again, and was carried offstage for good.

The rest of the Who struggled on through See Me Feel Me, with Townshend and bassist John Entwistle trying to fill in where the drums should be; Townshend, still playing guitar, even punctuated the song by kicking the cymbals.

Backstage, Artimus Pyle, drummer with the Who’s opening act southern rockers Lynyrd Skynyrd, was asked to stand in. But Pyle said he was too scared and didn’t know the songs. When Pete Townshend half-jokingly asked the 14,000-strong crowd whether there was a drummer – “somebody good” – in the house, Halpin and Dansere began waving their hands in the air.

“My friend was pushing me forward and saying, ‘Come on man, you can go up there and play, you can play,’” said Halpin. “He’s really the one that got me into it.”

In some interviews Halpin claimed the last thing he remembered was swallowing a shot of brandy and being introduced to the crowd by Roger Daltrey. That, and the size of Keith Moon’s kit: “It was ridiculous. The tom-toms were as big as my bass drum.”

After that, it was all a bit of a blur. However, video evidence shows Scott acquitted himself well on a jam through Howlin’ Wolf’s Smokestack Lightning and Spoonful before struggling a little on The Who’s own song, Naked Eye. Some 30 minutes later, Halpin walked away from the kit an even bigger Keith Moon fan than before: “I only played three numbers, and I was dead.”

After the show, a shell-shocked Scott and Mike went backstage, where they loaded up on free food and drink for their long journey home.

Scott Halpin went on to get married, manage a rock club, play in several groups and become composer-in-residence at the Headlands Centre For The Arts in Sausalito, California. He rarely played drums, preferring the guitar. Sadly, he died of a brain tumour in 2008, aged just 54.

On a whim, Halpin’s wife Robyn wrote to Pete Townshend’s office to tell him her husband had passed away. But she was astonished when Townshend replied with a message to be read out at Halpin’s memorial.

“Scott is often in my mind and always with the greatest gratitude and affection,” Townshend wrote. “He showed such youthful courage and humour standing in for Keith Moon that fateful day. Scott played so well too… He played drums brilliantly, smiled and went home…

“I measure my life by great and good people I have occasionally met,” he said finally. “Scott is one of the great and good ones. I worked that out in 30 minutes. That must surely say something about the man.”

Mark Blake is the author of Pretend You’re In A War: The Who and the Sixties.

The Who Quiz: Keith Moon