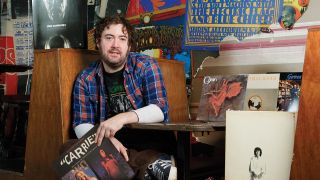 “I grew up with vinyl; it was my mum and dad’s record collection. My dad played guitar and is into folk, opera and classical music. There was lots of Latin American music, and soundtracks such as Paint Your Wagon. I found vinyl quite scary because you think you’re gonna break it and it makes quite a violent noise if you play it wrong. But by four or five years old, me and my sister had learnt how to put on the Latin American music and we’d jump around the room to it.

Cat Stevens’ Catch Bull At Four is my mum’s – she signed it [points out the initials ‘JH’]. She must have had this at university or when she was travelling. Growing up in Finsbury Park in the 80s, we didn’t sing hymns at school – it was Beatles songs and Morning Has Broken. Cat Stevens does folk but mixes so much more in with it – the track Freezing Steel is incredible. It’s funky folk music, with a Hammond on it, bound up in this mysticism he has. This record fascinated me as there’s a bit of ghosting on it, so you can hear the music before the track starts. It’s imperfect, which I love. And playing vinyl is a physical experience, having to get up to turn it over from side A to B. It keeps you participating in it.

My dad used to play banjo and loves it. One half of this Steve Martin album, The Steve Martin Brothers, is comedy and the other half is banjo music. The banjo stuff is better than the comedy. While this music isn’t progressive as such, Steve Martin’s outlook is. He was the first comedian to do stadiums – that’s why he wore white suits, to be seen – he did alternative comedy before anyone else, he’s a playwright, a screenwriter, a comedian, a lead actor, an accomplished musician and a magician. He wasn’t just giving these things a go – he mastered them before going on to the next thing. He’s my comedy hero. As a kid I’d hunt out all his films in the video shop, to the point where, because I was young and stupid, I rented The Naked Gun, thinking Leslie Nielsen was him. And then I got into Leslie Nielsen!

My mum used to love David Essex and my dad had a crush on Richard Burton, so we had a copy of Jeff Wayne’s The War Of The Worlds at home, and this became a big favourite for me at university. Every magician needs this opening track for their act. It’s so epic and exciting. It’s up there with The Phantom Of The Opera – it gets you by the balls.

When I was eight, we moved house. I had a lot of friends in London but in St Albans I had quite an isolated childhood where I spent a lot of time in the video shop, watching films and coming up with my own stories. My older sister was into Bon Jovi and Bryan Adams, and then she got the Alice Cooper single Poison. I found him very scary. Then Wayne’s World showed me his sense of humour, and my mate had Lost In America on single, which we thought was hilarious. That was my introduction to him.

I had braces and my mum used to take me to Hemel Hempstead to have them tightened. My teeth would really hurt. We’d walk past this record shop afterwards and one week, to shut me up, she bought me Alice’s The Last Temptation, which came with a free comic book. I totally fell in love with him. It’s a concept album about a travelling ringmaster tempting a kid with false promises so he can steal his soul, and it has the character Steven in it from Welcome To My Nightmare, which I had yet to discover. I was just getting into horror films and this fitted perfectly. His lyrics are amazing, his ideas are fun and funny – his is a celebration of the dark side of life. The comic book is brilliant as well, written with Neil Gaiman.

Being a huge Alice Cooper fan, you’d get the works with packaging for albums such as Billion Dollar Babies or School’s Out. ELO’s Out Of The Blue is great as a physical thing – nice artwork, lyric sleeves. My generation grew up with ELO everywhere so they can be taken for granted, but every track here is a Sgt Pepper – complicated, exciting and beautiful.

I love a soundtrack album and John Carpenter’s Lost Themes I and II stem back to my love of horror too. I listen to this when I’m writing, which is a lot. These are soundtracks to films that were never made so I come up with amazing imagery in my head to fit these when I write. I’m also a big fan of Goblin, especially for Suspiria and Profondo Rosso. These synthy themes aren’t just there for atmosphere – they add a very musical groove and feel that complements the film and creates an identity.

And then you get the Carrie soundtrack [by Pino Donaggio]. I walked past this in the window of Flashback Records in Crouch End, went to the pub, then had to walk back to the shop to buy it – it was eating away at me. I’d not seen many Stephen King adaptations and last year I forced myself to watch more. When I watched this, my brain exploded – it’s like watching a dream and the music is a huge part of that. It’s iconic.

I found Gowan’s Dirty Great World through a film soundtrack. This is what Lawrence Gowan did before joining Styx. This is quite a nice album but Moonlight Desires is the most amazing, romantic song, featuring Jon Anderson on backing vocal. I heard this for the first time in a film called Wolf Cop, during a romantic montage where Wolf Cop and this woman are locked in a cell and they have sex to this song. I saw the film once; I’ve listened to the song 100 times. I’ll play this when I’ve had too much to drink and I’ll dance around my kitchen.

Bat Out Of Hell gets all the love but Meat Loaf’s Dead Ringer deserves attention. I never really fitted in during my teens. We’d go to Our Price in The Maltings and my mates would rip the piss out of me for buying Pulp. I found Meat Loaf through The Rocky Horror Picture Show and Wayne’s World. He’s got an amazing voice, amazing range, huge personality. This album’s great, really theatrical and operatic, and I love the imagery as well. He’s a big guy, too, and I was a big guy… he’s an inspiration as a performer.

I love Season Of The Witch, and I grew up with things like Universal Soldier, but I’m picking Donovan’s Essence To Essence as a curveball. It’s folky and mystical with some really funky stuff on there too. I really like it – it’s a bit of comfort listening while I’m doing other things. It reminds me of my folks listening to John Denver, James Taylor, Cat Stevens and him. And imagine how great it was to find out he does backing for Billion Dollar Babies!

Everyone assumes I’m only into Slayer and Anthrax and heavy metal. Music is a bit like a remote control for me – when you find your remote control, you stop looking. I found Alice Cooper. But I’m still exploring, and want to discover as much stuff as possible.”

Nick’s food show Eat Your Heart Out is online at www.dave.uktv.co.uk and he’s on tour now. See www.nick-helm.co.uk for details

Phil McNulty gives us a peek at his proggy record collection

We take a leaf through Ben Wheatley's record collection

Marc Riley lets us take a look through his record collection