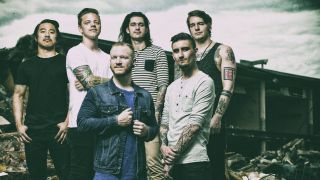 The band standing in the rubble before you have been on a long journey. The name We Came As Romans might be new to some of you, but the Michigan sextet have been going for a decade, slowly but surely coming up through the metalcore scene in the States.

During that time, WCAR – Dave Stephens (lead singer), Kyle Pavone (clean vocals, keyboards), Joshua Moore (lead guitar), Andy Glass (bass), Eric Choi (drums) and Lou Cotton (rhythm guitar) – have carved out a niche as one of metalcore’s most fun-loving bands. The joyous live shows that they perfected while still at high school in Detroit led to them inking a deal with Equal Vision records, who released debut album To Plant A Seed in 2009, which charted in the Billboard Top 200. They went on tour with everyone from Of Mice & Men to Asking Alexandria, and did their first stint on the Vans Warped Tour in 2011. Two more albums followed: that year’s Understanding What We’ve Grown To Be and 2013’s Tracing Back Roots (which hit Number 8 in the US charts), building on their reputation for delivering hook-filled, heavy music with a shit-eating, no-care-in-the-world grin plastered on their faces. This was no doubt helped by their continued presence on the Punk Goes Pop album series, where they covered the chart-bothering likes of Taylor Swift and The Wanted.

For their next, self-titled album, they’ve enlisted the talents of superstar metal producer David Bendeth, who provided the polished sheen for Of Mice & Men’s breakthrough Restoring Force album last year, helping Austin Carlile’s crew to make a leap into big venues like London’s Brixton Academy and to win a support slot with Linkin Park. In short, We Came As Romans have spent the last 10 years mounting a preliminary campaign for hearts and minds, and now they’re stepping things up and planning an invasion.

But for the band, this shiny new album is a massive departure from their comfort zone. Where there once was positivity, patience and platitudes, there is now pain. The band who sang about a desire ‘to show love and show compassion’ are now despairing that ‘the world is drowning’. Look at WCAR’s previous album titles, and you’ll see a theme of growing up and reflecting on the road they’ve travelled. But this time, they’ve jumped off the beaten track to explore more rage-fuelled, metal territory.

“There’s a line in the song The World I Used To Know that says, ‘Our innocence, our ignorance were lost but they’ll be found’”, states Dave, speaking about their new music down the line to us from a busy street in Hong Kong, where the band are due to play the next show in their quest for world domination. “It’s about the fact that when you’re young, you have this youthful spirit. But as you get older, you start to look a little differently at the world. So this album reflects that. It’s definitely an evolution; it’s honest and it’s, very certainly, a lot more leaning toward the angrier side of life. There are a lot of things that we aren’t happy with in the world, and we miss having that spirit. So we just have to take a longer, harder look at ourselves to find it. It’s still there, though…”

Some of this negativity has grown from frustrations with the road, as the band have toured across Europe, South America and Russia in determined pursuit of their dreams.

“The biggest challenge when you’ve been in a band this long,” Dave begins, “is just being able to put up with each other. The travelling is gruelling – we’ve just travelled 30 hours to get here – and cracks between members do start to appear. We’re tired, frustrated, we miss our families, and you have to find ways to not kill each other. We’re all here because we want to play music and we want to travel the world, but we aren’t going to pretend that it is easy. It’s a lot of hard work.”

This lack of pretence has been key to their more visceral approach: they’re no longer keeping up appearances 24⁄7, worrying what people might think of them.

“We’re not as scared of speaking our minds as we used to be,” he reveals. “There was a fear that if we viewed something too negatively, then our fans would get the wrong impression of us as people. However, now we just want to be as open and honest as possible, and sing things in the exactly the way we’re thinking them. We’ve realised that even though our thoughts and lyrics are angrier and not as uplifting, it doesn’t mean positive action and positive change can’t come from them.”

The result of this more honest, frustrated and, dare we say, edgier We Came As Romans has also manifested itself in the sound of their fourth album. It retains the catchiness that has been their calling card so far, but the Day-Glo, happy-go-lucky vibes of previous records are offset by the fury of tracks such as Regenerate – a song that seethes with disdain for the selfishness of the modern world, and is accompanied by a video that shows the band and a few hundred fans smashing up a car in a display of wanton destruction. Anthems and ragers in equal measure? It could be their recipe for success.

“More than anything, we wanted this record to be real,” explains Dave. “We wanted real guitar sounds and drums that sounded totally raw, and we didn’t want to tune the vocals at all or have anything behind them. We just wanted it to sound as honest as possible. It’s all part of the evolution of the band, comparatively. When you consider it against our previous albums, this is much darker, angrier. Much more menacing.”

Impressed with David Bendeth’s crisp production, WCAR chose him to bring the whole thing together, and it’s certainly given their new album the same level of crossover potential as scene peers Of Mice & Men.

“We all loved Restoring Force,” Dave tells us. “He did a great job on that. We wanted someone that really understood this type of music and how to get the best out of those songs. I have to say, even though we toured with those guys a bunch of times, I never really listened to much of their earlier albums. I’d watch them play and think they were great, but it wasn’t until Restoring Force came out that I went back and listened to them in my free time. I think everyone involved was working to their maximum on that.”

During that extensive touring history, WCAR even took OM&M out as a support band. While you could forgive Dave for feeling jealous about Austin and co’s success, he’s pleased for his friends, and excited about the opportunities their success brings for his own band.

“The way that myself and my bandmates look at it is with no type of envy,” shrugs the singer. “I think it’s great that those guys are doing so well, and it makes me think that if they can do it, then we can do it, too. I’m really happy for any band that blows up that big; it’s definitely in our mind to do that, and I think we’re making another step closer to being there.

“We definitely see ourselves as part of that scene with Of Mice & Men and Asking Alexandria,” Dave continues. “It’s becoming exciting again. Rock bands are getting in the charts and playing some pretty big rooms. Where we fit into that with this new record, I’m not so sure. The success of those bands definitely opens it up for us.”

You can’t help but wonder what this more reserved, mature and serious Dave would say to those fresh-faced kids that released WCAR’s earliest work, if he were able to go back and talk to them.

“I’d probably tell myself to get singing lessons earlier, for a start!” Dave laughs. “But really, I think you have to go through these periods of growing and work stuff out for yourself. I look back and our songs from then sound very young to me now. There’s nothing wrong with that, of course, but we’ve had to come up the hard way. It’s made us better musicians and songwriters, and it’s meant that we’ve been able to discover things our own way. So I don’t think I’d give myself any advice – I’d just tell them to carry on going. Let them figure it out the way that I had to.”

It’s commendable that Dave denounces the idea of a shortcut in a musical career. After all, we live in a culture where the idea of playing the long game is alien to many. Instead, quick fixes and entitlement are the order of the day. But although, in the UK at least, We Came As Romans may be new faces, their gradual progression has been all part of the plan.

“We’ve always been about ‘slow and steady wins the race’,” says Dave. “Rather than blowing up real quick with a big hit and then living off it for the rest of our lives. I think that because of the way we’ve done things, it means that we have a very hardcore fanbase. It’s really solid. So whatever happens with this record or any record that we put out in the future, we’ll have these really awesome people that have connected with us over time. We never tried to do whatever was cool; we just made really honest music. That’s our strength.”

Again, this is a very considered – a more grown-up if, you will – response. It’s clear that We Came As Romans have evolved, the growing up they did in public over, and Dave and his bandmates have graduated to Chapter Two of their story.

“That’s exactly what it is. I like what you said; the closing of one chapter and transitioning into another,” agrees Dave. “We definitely feel like a different band now. Not just better songwriters and musicians, but more rounded and experienced people. We’re now totally comfortable with who we really are, and I think you’ll hear that on the new record. We’re still the same band, just pushed harder and faster to where we need to go.”

They might not have hit our world with quite the same force as the Romans, but Dave et al’s empire is definitely growing.

Was the filming day as chaotic as it looks in the finished video?

David Stephens: “We invited some fans to come on the shoot and thought that 50-100 people would turn up… but there were about 300! Because there were so many people, we completely totalled this car! It looked like a riot!”

Did you fear for your safety at any point?

“Fans started taking the whole thing apart to get souvenirs to take home, and one kid grabbed the gas cap, and suddenly all of this gas was just spewing from the car! About 20 foot away there was this massive fire, because there are fires in the video, too, and we were like, ‘Holy shit! This whole place is going to blow!’ We’ve got fires, 300 people and a flipped-over car with gasoline all over the place. If the cops had shown up, then our asses would have been thrown in jail!”

What did you do to stop things from getting out of control?

“We ran to the hardware store and got it cleaned up and patched up the car, but for about 20 minutes I was thinking, ‘Well, I’m either getting blown up or sent to jail today!’ Ha ha ha!”