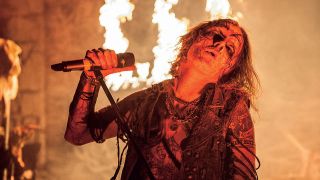 It’s been over two decades since Watain began their crusade, spitting blood and bathing in fire across the globe. Welcome to their mastermind’s world.

“Although there was never a precise moment when I knew metal would soundtrack my life, the closest experience was seeing Metallica in 1993. The pyros, the volume and the madness that grabbed hold of 30,000 people came to change my life forever.

"I realised the life-altering potency of metal then, and it filled me with the utmost awe and respect. I realised then that this was perhaps my ticket out of boredom and alignment with authority. If I only knew how right I was then…”

The concept of death is closely linked to freedom and liberation

“The world we are born into and the lives of most men constitute a prison for the spirit. Death presents a gateway out of that prison. With all that being said, I’ve still always aimed to live life to the fullest in the sense of allowing as much fire, passion and wildness to colour my endeavours, which is also why Watain has been allowed to take things over entirely. Death is something I am very much looking forward to, but I am still in no rush to get there.”

I’ve studied the Devil quite meticulously

“Diabolic symbolism, archetypes and ideas brought me closer to what the Devil actually represents. When you’re in your early adolescence you start to look for frames that outline the standpoints and views you’ve developed, and these things were the perfect frame for me.

Our live rituals are indescribable

“They are something I still find myself in loss of words of when trying to describe. It is a mystical experience, a sense of transcendence into a loftier state of being. You leave your earthly shell behind and become one with the spiritual fire, the fierce and liberating chasm in which the Devil has his throne. It’s a loss of control, a descent into madness. We become a bridge between this world and the beyond.”

The stench from the flesh and blood is extreme

“In order to create such a bridge you need to stimulate certain parts within yourself that are in a latent state. Exposing your own senses to extreme conditions is a way of doing that.

"Combining an outburst of passion and a state of euphoria, which the live shows indeed are, with scents and objects that would normally you in a state of shock and panic, is a very effective way of crossing the boundaries of order and conformity. You force yourself into an ‘unnatural’ state, a backwards and all-defying state of spiritual elevation.”

If you expect Watain to be your gateway into Satanism, think again

“You are most certainly looking in the wrong place. People often seem to think that the Satanism which constitutes the ideological and religious fundament of Watain is something that we want others to take part of and explore through us. This is not the case. We have never intended to be messiahs or zealots in that sense.

"We do take our chances to underline our distance from the common herd’s conception of Satanism as the spirit-less and mundane ideology it is often referred to (the Church of Satan, for example).

"But I’d never ask of anyone to understand or relate to those things either; that’s not why we are here. These things are for us, and without them this band would not exist. It’s like wanting to get into the Yakuza by looking into the barrel of one of their member’s shotguns.”

“It was just one of these books that grabbed me by the neck and took me far, far down below. It reminded me of the pilgrimage that we have been on with Watain, of the long and hard road through the desolate wilderness. A melancholic vastness mixed with rampant outbursts of blood-soaked barbarism… One of the songs from our album, They Rode On, is heavily inspired by the feelings that this book gave me.”

Black metal has not changed

My understanding of humanity is quite thorough

“And I am probably far less cynical about it than people might think. It’s a know your enemy thing. We formed Watain to build our own world outside that of man, and the longer we have been going for, the more alienated and opposed we feel to whatever lies outside our own world. We have little in common with mankind, but that is something that black metal requires of all of its mouthpieces.”

We live on the brink of disaster

“That should be achingly clear to anyone who keep their eyes somewhat open despite society’s intent to keep them closed at all times. But the cup of madness and insanity is very close to overflow. In the grand scheme of things, Watain can be seen as a serpent dripping even more venom into that cup. For our own part, the goal with Watain is to defend our walls from intruders and keep it a world on its own, where we live by our own rules far away from the world of common men.”

“One of the interesting things about the times we live in is the ever-increasing pace of things. I’m not only talking about the speed that the digital revolution on brought on, but also the rapid escalation of madness and violence, the ever-stronger presence of diabolical influence in popular culture, and ever-growing shadow of terror in the hearts of men… These things make for very interesting times indeed, and wherever we will be in 100 years, I’m sure it’s not going to be anywhere jolly.”

Too many musicians today are too focused on just entertaining

“They fulfil their own personal needs, greasing their egos and hiding their wounds. They often seem to not have any solid, heartfelt foundation for what they do. I want music to hurt, to burn, to shatter illusions, to bring me a sense of independence and freedom. In order to do that, you need to possess those characteristics yourself, as an artist. I think a lot of musicians today kind of miss that point. There’s too many people that have a ‘tongue in cheek’ attitude towards this form of music and what we need to do is to cut those tongues out.”

What exactly is the Church of Satan?

The Black Metal Quiz: from Celtic Frost to corpse paint