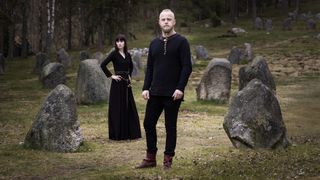 Thirteen years after it was first conceived, Wardruna’s rune-based album trilogy is about to be complete with the release of Runaljod – Ragnarok on October 21. Undertaking a journey of rare and transformative dedication, the band have reached deep into both the heart of Nordic esoteric tradition and the consciousness of devoted followers worldwide, the organic and profoundly expressive nature of their music tapping into a resonance that, once experienced, feels like a rediscovery of something long dormant and universal – a reconnection with one’s roots no matter what part of the planet you call home.

Built around the nucleus of band founder Einar Selvik and Lindy-Fay Hella, Runaljod – Ragnarok takes a more distilled approach to its predecessors, 2009’s Runaljod – Gap Var Ginnunga and 2013’s Runaljod – Yggdrasil, like a portal being brought into sharper relief, providing the ground for some perennial and binding power to emerge. We are very honoured to present the first track to be unveiled from the new album in the heartbeat-recalibrating form of Odal, its transfixing, mantric percussion offering a backbone that gives rise to drones like the most permeating of balms and massed, migratory harmonies that include Einar’s own children as they carry you along into the most transcendent of states.

“Odal,” says Einar himself, “represents such things as family, heritage, birthright and allodial right [land held that’s not subject to custodians such as landlords or governments] but also inheritance in a broader and more metaphorical sense. Serious and reflective poetry melting together with the sound of a child’s voice is for me a very strong expression in itself. And with a theme like this as a starting point, it is safe to say that doing this song together with my own two children made it very emotionally charged for me, which I can only hope is something reflected clearly in the end result.”

Enter the awe-inspiring current that is Odal below!

As of today it is possible to pre order “Runaljod – Ragnarok” as well as the following items and bundles from Wardrunas EU and US web-stores: