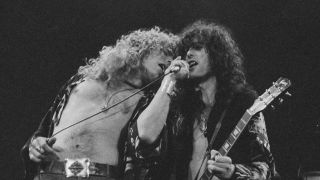 It’s the question that’s guaranteed to start an argument in an empty room: what’s the greatest classic rock song ever written?

So we’ve decided to put an end the debate once and for all and ask YOU to answer the ultimate question: what is the greatest classic rock song ever written?

Let’s be honest, it’s tough. There are an infinite number of contenders, by an endless array of bands.

Will you opt for one of the all-time greats by the giants of the 70s – Led Zeppelin’s Stairway To Heaven, Pink Floyd’s Money or Lynyrd Skynyrd’s Freebird?

Will you go back to the genre’s original gods – Jimi Hendrix’s All Along The Watchtower, Cream’s Sunshine Of Your Love or The Rolling Stones' (I Can't Get No) Satisfaction)?

Maybe it’s an MTV-era anthem like Bon Jovi’s Livin’ On A Prayer, Def Leppard’s Pour Some Sugar On Me or Metallica’s Enter Sandman that floats your boat?

Or perhaps it’s a newly-minted classic such as Nickelback’s How You Remind Me or The White Stripes’ Seven Nation Army – songs that show classic rock is alive and kicking as a genre.

It’s a near-impossible task, but if anyone can sort it out, you can. We’ve listed over 200 songs for starters, but you might have your own favourite that isn’t on there – simply write your suggestion at the bottom of the poll (please use the format Band Name: Song Title). Every vote counts.

Are you ready? Let’s go…