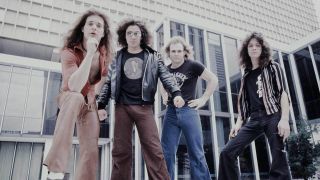 Back in 1978, Eddie Van Halen was asked what his band wanted to achieve with their newly-minted debut album. “All we’re tryin’ to do is put some excitement back into rock’n’roll,” he replied, modestly.

Modestly but accurately – and then some. Forty years after it was released, Van Halen stands as one of rock’s great landmarks. This was more than just a stellar debut album – it was an adrenalin shot to the heart of a music scene that was slumped in a corner, turning a nasty shade of blue. In just 35 minutes, Van Halen single-handedly saved rock’n’roll, ushering in the 1980s two years ahead of schedule. This is how they did it…

Runnin’ With The Devil

Like most of the songs on Van Halen, the opening track dated from the days when the band cut their teeth on the Southern California club circuit. Opening with a blare of cars horns – reputedly the idea of Gene Simmons, who produced one of the band’s early demos in an attempt to help get them a record deal – it quickly locked into a pulsing groove that provides a foundation for Eddie Van Halen’s restless guitar and Dave Lee Roth’s weaponised charisma. The sound of the blue touch paper being lit.

The song that reinvented the guitar god for the new era: one minute and 42 seconds of mercury-fingered genius that was as revolutionary as Hendrix had been a decade earlier. It introduced the world to Eddie’s radical two-handed tapping technique, though it was a happy accident that it ended up on the record at all. “We were warming up for a weekend gig,” said the guitarist. “I was just rehearsing and [engineer] Donn Landee happened to record it. The take on the record was a freak thing.” Freak or not, it remains the Rosetta Stone for every would be guitar hero that followed.

You Really Got Me

If The Kinks really did invent heavy metal with You Got Me, then this was Van Halen paying them back. One of dozens of covers they’d throw in their sets back in the days when they were called Mammoth, it took the original’s Jurassic riff and Van Halenized it to glorious effect. Producer Ted Templeman certainly thought so – this was the song that persuaded him to work with the band.

Eddie Van Halen once claimed he wrote his band’s early signature song as a pastiche of punk: “A stupid thing to us, just two chords.” The result was far from dumb. Ain’t Talkin’ ’Bout Love was everything that was fantastic about Van Halen wrapped up in three and a half minutes: the jagged guitar that sounds like it would knife you in a heartbeat, the vocal squeals and showboating from Roth, the weird shit like the sitar that doubles up the guitar solo.

The oldest song on the record dated back to 1974, when it was called Show Your Love, but it didn’t show its age. Like most of the tracks on Van Halen, it was cut live, without overdubs – Ted Templeman rightly clocked that would be the only way to bottle the band’s relentless energy. The doo-wop breakdown that crashed the party near the end was the roadmap to Dave Lee Roth’s entire career.

Van Halen sounded like they were strutting, even when they weren’t. And no song on Van Halen strutted like Jamie’s Cryin’, a song about the aftermath of a one-night stand that’s surprisingly sympathetic. Killer harmonies too – something VH have never got their due credit for.

Van Halen’s secret weapon: Ain’t Talkin’ About Love and Eruption might be the album’s marquee tracks, but Atomic Punk is its best. As Eddie alternates between sawing through sheet metal and firing off laser beams with his guitar, Diamond Dave stalks the dark streets, king of all he surveys, oozing cartoon menace and attitude. That final, stretched squeal of “The Atomic Punk!” shows off Roth’s vocal shortcomings. But never has anyone done so much with the so little.

Van Halen did ‘heavy’ effortless, as a wheezing Black Sabbath found out when they brought them out as support in 1979. But they could do ‘pop’ too, as this proves. If nothing else, it’s a showcase for Michael Anthony’s instantly recognisable backing harmonies – Roth called the bassist “one of the greatest high tenor voices ever.”

Van Halen were never ones to shy away from covers, but their choices were always immaculate and their reimaginings frequently brilliant. Their take on forgotten Chicago bluesman John Brim’s 1954 song is a case in point – what starts out as a smoky front porch strum suddenly erupts into full-blown lip-smacking lasciviousness. There’s even a nod Elvis-style curl of the lip at the end, a cute nod to the recently deceased King of Rock’N’Roll.

Perverse bastards that they are, Van Halen saved the worst for last. On Fire is the debut album’s weakest song – putting forward motion over anything approaching a tune (and let’s not get started on what passes as the chorus). But it didn’t matter. The genie was out of the bottle, never to go back in. In just 35 minutes, Van Halen hadn’t just put some excitement back into rock’n’roll, they’d changed things forever.