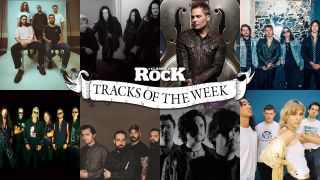 As we steer into the jumper-wearing climes of September, Team Classic Rock remains in sunny spirits thanks to the ongoing supply of quality new rock that reaches our ears. Last week you voted the following bands into your top three:

Congratulations to first prize winners Alter Bridge! And well done Airbourne and The Dust Coda on quality second and third place tunes. Good shit all round. Now, let's see who you rate the highest this week; get listening, then get voting with the poll at the foot of this page. But first, Take The Crown...

One of the bright lights in the new generation of progressive rockers, Koyo tap into the grungier side of their arsenal on the title track of their upcoming LP. Hazy and melodiously enveloping, with a video and vibe that flits pleasingly between Porcupine Tree and Radiohead, it’s stuck in our heads and we reckon it’ll get lodged in yours too.

Toque - Never Enough For You

You’ll recognise half of Toque as ‘the other two blokes in Slash ft Myles Kennedy And the Conspirators’. Here, however, Todd Kearns (singer/guitarist) and Brent Fitz (drummer) take centre stage in this bouncy, Doc Marten-stomping feast of heartfelt, synth-powered 80s drive and good ol’ fashioned rock’n’roll. You’ll be singing the chorus under your breath before you know it...

The Greek purveyors of upbeat, good-time stoner rock weave touches of electronic/industrial meat into the opening bars of this new single. Beyond that it’s a more organic, bong-waving affair, but retains the darker quality established in those first notes. Check out more on their new album, Faith In Physics, which is out on September 27.

Having emerged a couple of years ago from the ashes of Heaven’s Basement, The Cruel Knives are making good on their early promise with Hollow People. A brooding yet edgy mix of emotional vocal power and heartily satisfying, blues-laced rock, it creates a cool happy place between current and classic sensibilities. Like what you hear? You can find more on their new record, Side Two, out later this month.

Rock bands of yore have a funny way of coming out of the woodwork when you least expect them - one such example being Gypsy’s Kiss, the first band of one Steve Harris (who went on to join a little-known group called Iron Maiden), who now return with this warm yet driving, twin-lead-tastic dose of 70s goodness.

Former White Lion and Freak Of Nature, Danish singer/guitarist Mike Tramp hits a gleefully strumming, Bon Jovi-infused sweet spot in this cut from latest solo album Stray From The Flock. One to crank up as you daydream of sunny road trips in the fading light of summer. ‘Oh what a ride’ indeed, as Tramp sings.

Set on a beach in spirited manner of Supergrass circa Alright, but sounding quite different, Rat Face Lewey have brightened our day no end with The Pirate Song (despite the disappointing lack of actual pirates). Almost Green Day-esque in all its tight, sunshiny swagger, only with more classic rock’n’roll leanings. We like.

A delicious whiff of the 90s to finish, courtesy of Miss June. If you enjoy the grungy yet gnarly sweetness of Wolf Alice, and also fancy a side of Sonic Youth (attacked with a chainsaw, in a good way), you’ll love this. Check out more on their debut, Bad Luck Party, which is out on September 6.