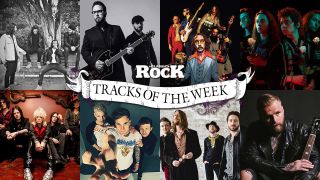 Afternoon all, hope you had excellent weekends and are having a great start to the week. And even if this isn't the case, we've got all you need to turn things around right here – eight of the very best new tunes in rock, from A-listers and newcomers alike. Flippin' LOADS of you voted in last week's poll, placing the following artistes in your top three:

3. Toque - Never Enough For You

Congratulations to The Cruel Knives on a massive victory result! And full credit to Gypsy's Kiss and Toque, who achieved impressive scores in second and third places. Now then, let's see what you make of this lot; get listening, then get voting in the poll at the foot of this page. But first, another spin of last week's champions' winning track, Hollow People...

The Dead Amigos - Hold Out

A blazing, sun-drenched opener for you this week, thanks to Melbourne rockers The Dead Amigos (they clearly don’t know we wore our proper winter coats for the first time in months this morning, or maybe they do…). All blues, funk n’ soul and the kind of jubilant, arms-aloft chorus to take you straight back to your hottest festival experience.

The Cold Stares - Any Way The Wind Blows

The Indiana blues rock duo are on a roll, and Any Way The Wind Blows is the appetising latest piece of evidence to prove this – smooth and classy, for sure, but straight from the gut. Sharp yet swaggering, fresh yet familiar, it’s packed with the kind of garagey, storytelling hoodoo that gives them a consistent source of edge and flavour.

Shit’s getting funky in Arizona, or so these psychedelic, fiercely groovy dudes would have us believe. Previously described as “stoner-disco” and “desert-boogie”, Black Magic Flower Power could almost be some sort of hidden spin-off of the George Clinton empire, though the kaleidoscopic desert vibes create a twist in proceedings.

Now for some good times with Helsinki’s very own Tasmanian Devil and Hanoi Rocker-in-chief. Michael Monroe sounds exactly like Michael Monroe on this toe-tapping, head-bobbing mesh of glam, punk and rock’n’roll – complete with super-king-sized chorus. The man is almost alarmingly unstoppable.

Ditched from the final version of Anthem Of The Peaceful Army (because it “didn’t fit the tone of the album”), Always There now features on the soundtrack for Sam Taylor-Johnson’s new movie A Million Little Pieces. ‘Dressed up off-cut from the reject pile?’ you may ask. Actually, not so much. For our money Always There is a quality track, flatteringly Zeppelin-y but also suggestive of the kind of stronger tunes they could be capable of...

If grunge happened in the Mojave desert, and was sprinkled with pop from the get-go, it might have sounded like this new single from the Nuneaton trio. Hooky, heady and heavy, Outlaw is the sort of riff-monster we’d readily take a lot more of. And they’ve not even released their debut album yet, though that’s coming soon...

The blues guitar prodigy continues to find his own voice – and cake it in sunkissed blues, roots and soul nostalgia – on this super sweet new tune. Tasty backing harmonies help push things up a league, and Jones’ own considerable arsenal of chops is deployed thoughtfully, leaving the tune itself front and centre. As it should be.

It's almost over for another week (and we could have easily filled this up with more...) but we're leaving you in good hands with the snappy latest Kris Barras single. Fusion-y hints of Richie Kotzen filter into the verses, but the chorus and melody throughout steer the Torquay native firmly in a big, bold, all-are-welcome 'rock' direction, rather than a blues guitar hero niche. Nice.