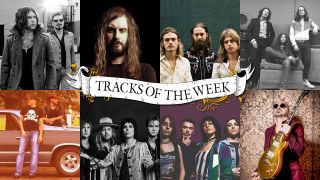 Another week come and gone, and, quite frankly, we've no idea where it went. We did have time to listen to lots of new music, and just like every other week we've picked eight that particularly tickled our taste buds.

But what of last week?

Well, congratulations to Hands Off Gretel, whose saucy Kiss Me Girl clearly excited many viewers. So congratulations to them, and also to Atari Ferrari and Austin Gold, who weren't far behind. So here's the results, in reverse order.

1. Hands Off Gretel - Kiss Me Girl

So well done to Hands Off Gretel, and here's your chance to watch them triumph again.

This week? Don't forget to vote for your new favourite at the foot of the page.

And one bit of house-keeping: for reasons far too tedious to mention, we're switching Tracks Of The Week to Mondays, so the next exciting super-instalment will be on Monday October 1. We'll see you then!

The latest video from rock’s brightest, sparkliest new young things includes cowbells, casinos, a spot of knife-throwing with Alice Cooper and so much wide-eyed, jazz-handed charisma we started grinning quite involuntarily. It’s stupidly good fun, gloriously bouncy without being annoying… If you thought they might have peaked on previous album Everybody Wants, think again – this is easily one of the best things they’ve ever done.

Rival Sons - Do Your Worst

Huzzah! Jay Buchanan, Scott Holiday and co are back with new music, and it’s a bit good. After the more pronounced soulful factor of previous album Hollow Bones, this new tune from Long Beach’s finest suggests a return to their bluesier, dirtier rock’n’roll side – while retaining the suave classiness that they’ve steadily built upon over the years. Welcome back dudes, look forward to seeing what comes next...

Riffy, no-bullshit rock’n’roll now from Spanish rock/heavy metal four-piece Lizzies – complete with video that sees the band systematically take down various undesirables and aid their victims. All ending with a lovely big show in the street, mixing hints of Motorhead and The Runaways with their own attitude-laden swagger. Nice.

We’ll take a little trip to the dark side now (well, Cambridge…) with the latest track from these proto-metal/psych renegades. An uptempo, galloping swirl of the trippy low-fi vintage sound they’ve cultivated over nearly a decade now, it’s whetted our appetites for upcoming album Wasteland, which goes on sale in October.

Oh to be young, Dutch and in a really good band… Classic rock’n’rollers DeWolff appear to be having, like, the best time in this new video; shot at Lowlands festival in front of a hefty crowd, and flanked by pyro blasts. Organist Robin Piso especially looks like the happiest guy in the world – grinning and head-bobbing like something out of Sesame Street – as the trio romp through this chipper yet warm, Southern-laced highlight from this year’s Thrust.

Taken from the Lockport, NY band’s new album Everything’s Gonna Be Alright (yours to buy on October 19), this laidback cocktail of blues, soul, boogie and Southern rock calls to mind the likes of Little Feat and Creedence Clearwater Revival – without losing sight of their own slightly off-kilter character. Good music for chilled times.

“How is Elvis, and have you seen him lately?” We’re not sure why that line from the first Ghostbusters movie is the first thing that came to mind when we saw that title, but it was an oddly pleasing backdrop to this cool, catchy slice of late ‘60s/Hendrix-inspired blues rock. Built around an infectious guitar hook, it’s a nicely unpolished shot of nostalgia. Check out more on their upcoming album Uncomfortableness, out on October 12.