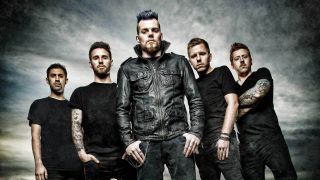 The Raven Age: stepping up to the plate

Over the last 18 months metal’s old guard have proved time and time again their relevance, both artistically and in crushing it live. However, talk about the eventual sad day when they hang up their guitars is omnipresent, as are questions of who will step into the breach.

Part of a British rock scene in rude health, London’s The Raven Age are one of the strongest candidates looking for the opportunity to join the elite. Combining modern metallic crunch with soaring hard rock vocals and melodic hooks, the quintet have earned their stripes supporting and indeed winning over the crowds of one of the biggest in the game: Iron Maiden.

“I’ve seen some of my favourite bands be crushed when they were supporting Maiden, so to be accepted by their fans was great,” says guitarist George Harris, enjoying a moment of calm before 2017 kicks off with a tour supporting another of metal’s elite: Anthrax. Though their much-anticipated debut album, Darkness Will Rise, will finally be released in March, The Raven Age are far from young upstarts, having been going for many years.

“We actually started in 2009 when my girlfriend and Dan’s [Wright, guitars] introduced us,” claims George of their very “un-rock’n’roll” origins. “We jammed regularly but after a while we were sick of looking at each other’s faces so we decided to get a few guys together and form a band.”

Their first show wasn’t until February 2013 and a self-titled EP arrived in July the following year, with the intervening period seeing them grace stages alongside the aforementioned metal heavyweights, as well as the likes of Gojira and Tremoti, honing both their live performance and the songs that give Darkness Will Rise such an assured, bullish air. Given the lengthy gestation period, it’s understandable that George and the band are impatient to finally release their debut, made even more tantalising by the involvement of major label BMG’s involvement.

“We grew up listening to a lot of bands with that singing and screaming element, but we realised our favourite parts were the melodic hooks, so it wasn’t until Michael [Burrough, vocals] joined that we were able to concentrate on that, and that’s why everything’s taken so long. Now I’m just eager to get the bloody thing out.”

With their new music given the ultimate litmus test, the question remains whether George and his comrades have what it takes to take up the metal banner when it comes their way.

“Eventually the likes of Maiden, Metallica and AC/DC are going to step aside, and though Avenged and Slipknot are there to step in, you’re going to need new bands to fill the space. It’s not like people are going to stop going to Download every year. Obviously we’d like to be one of those bands, but we’ll see!”

The Raven Age support Anthrax in February. Darkness Will Rise is out on March 17 via BMG.